This mid-year edition of the Migrant Workers Centre newsletter includes updates about:

Did you lose shifts during the recent Victorian lockdown? Temporary visa holders with work rights are eligible for COVID-19 Disaster Payments. 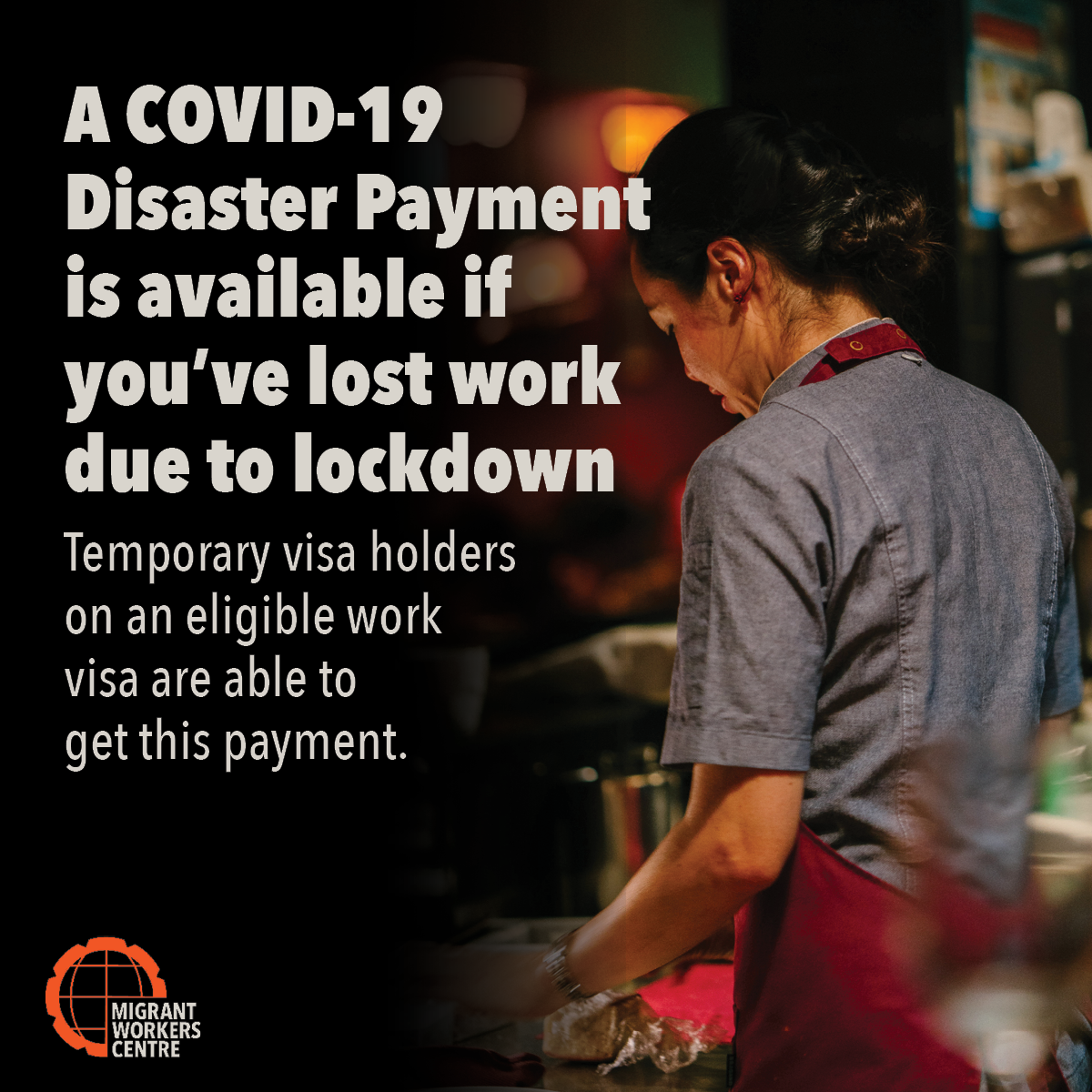 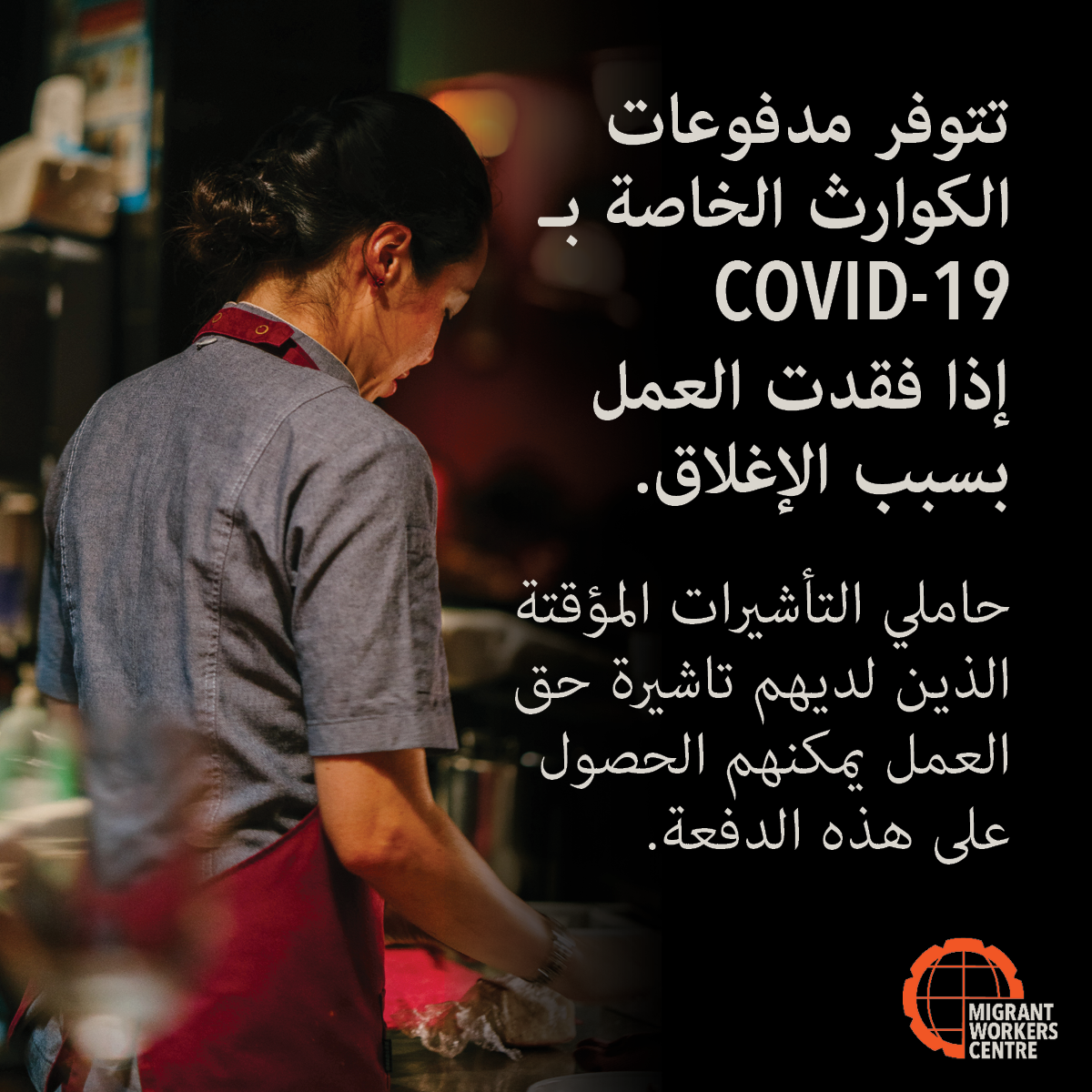 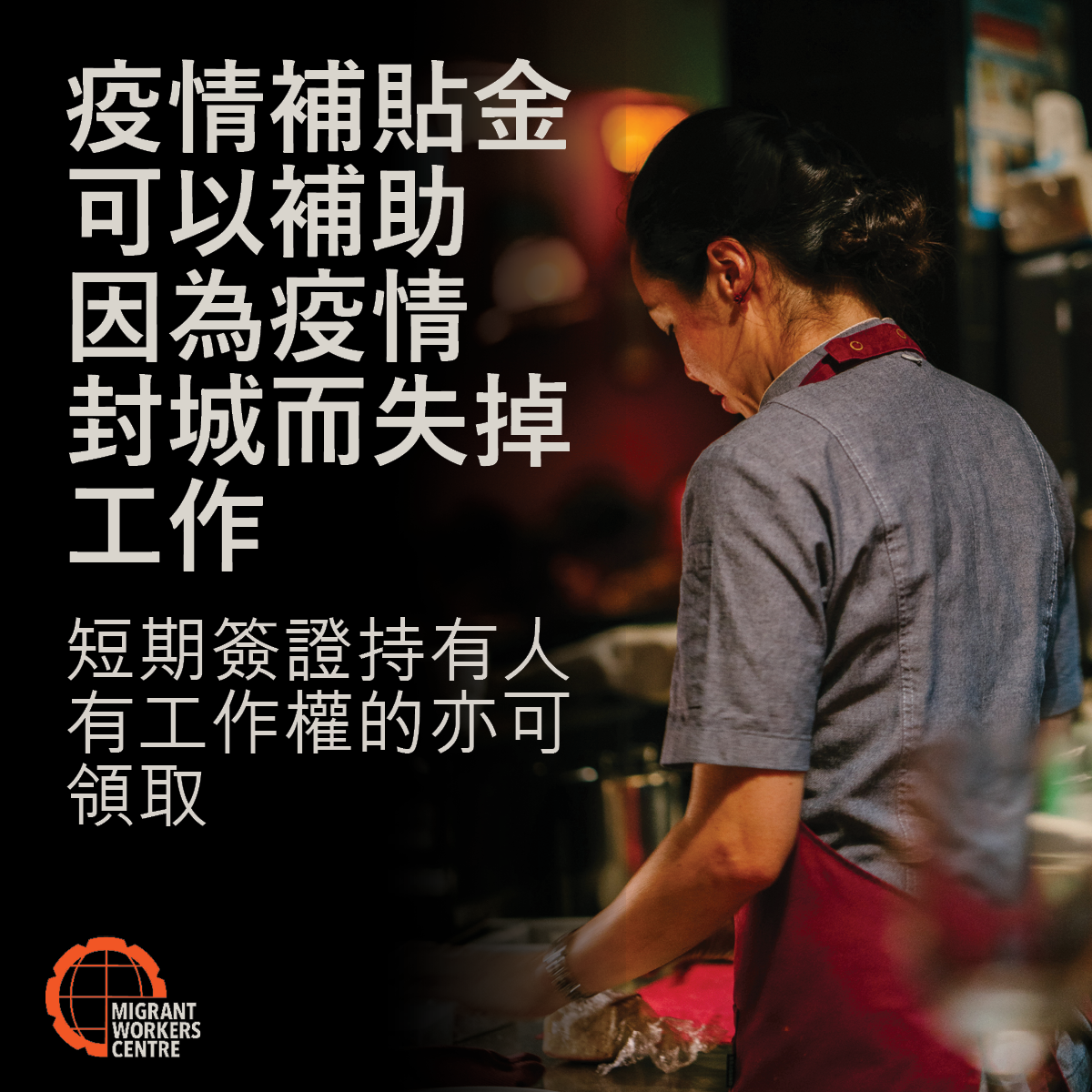 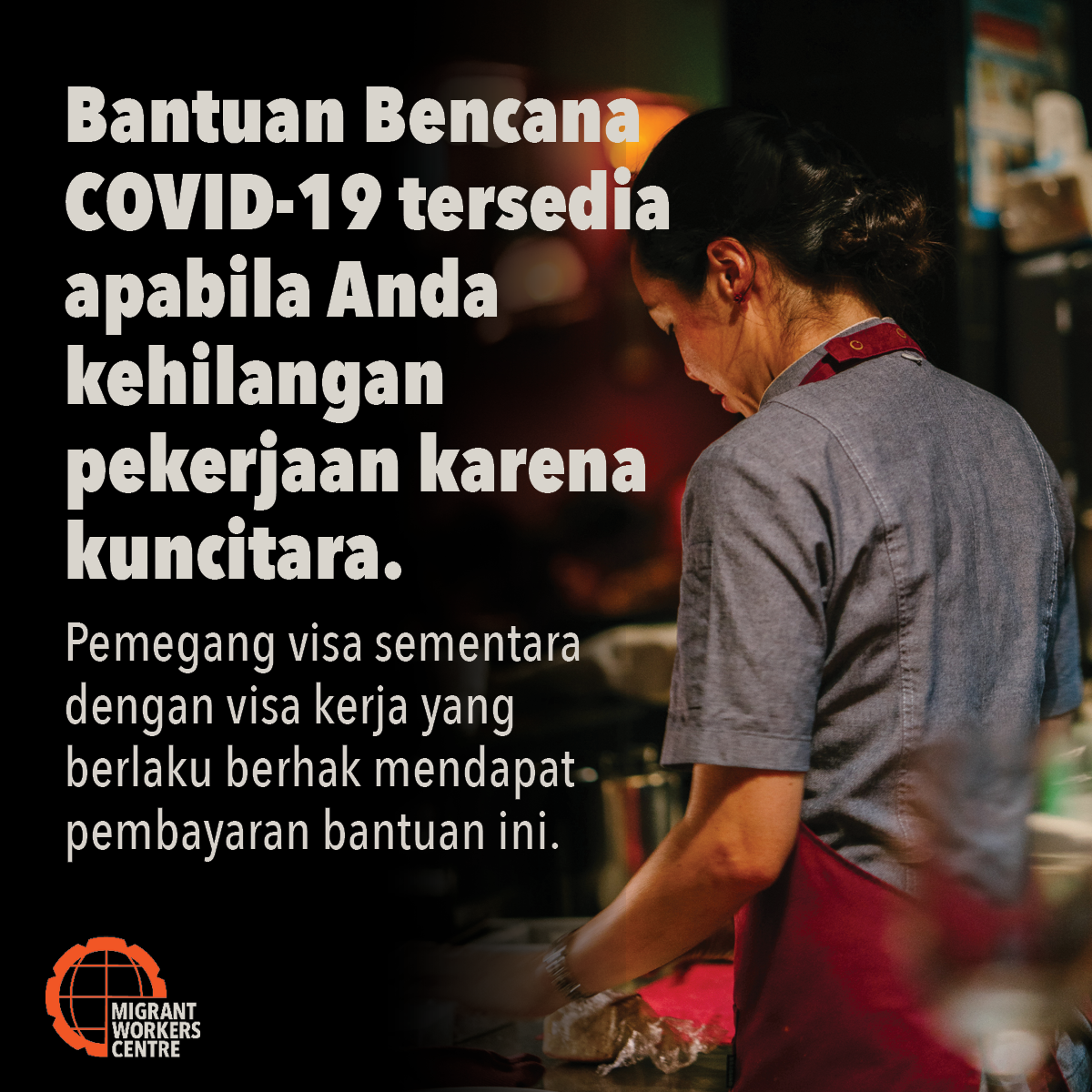 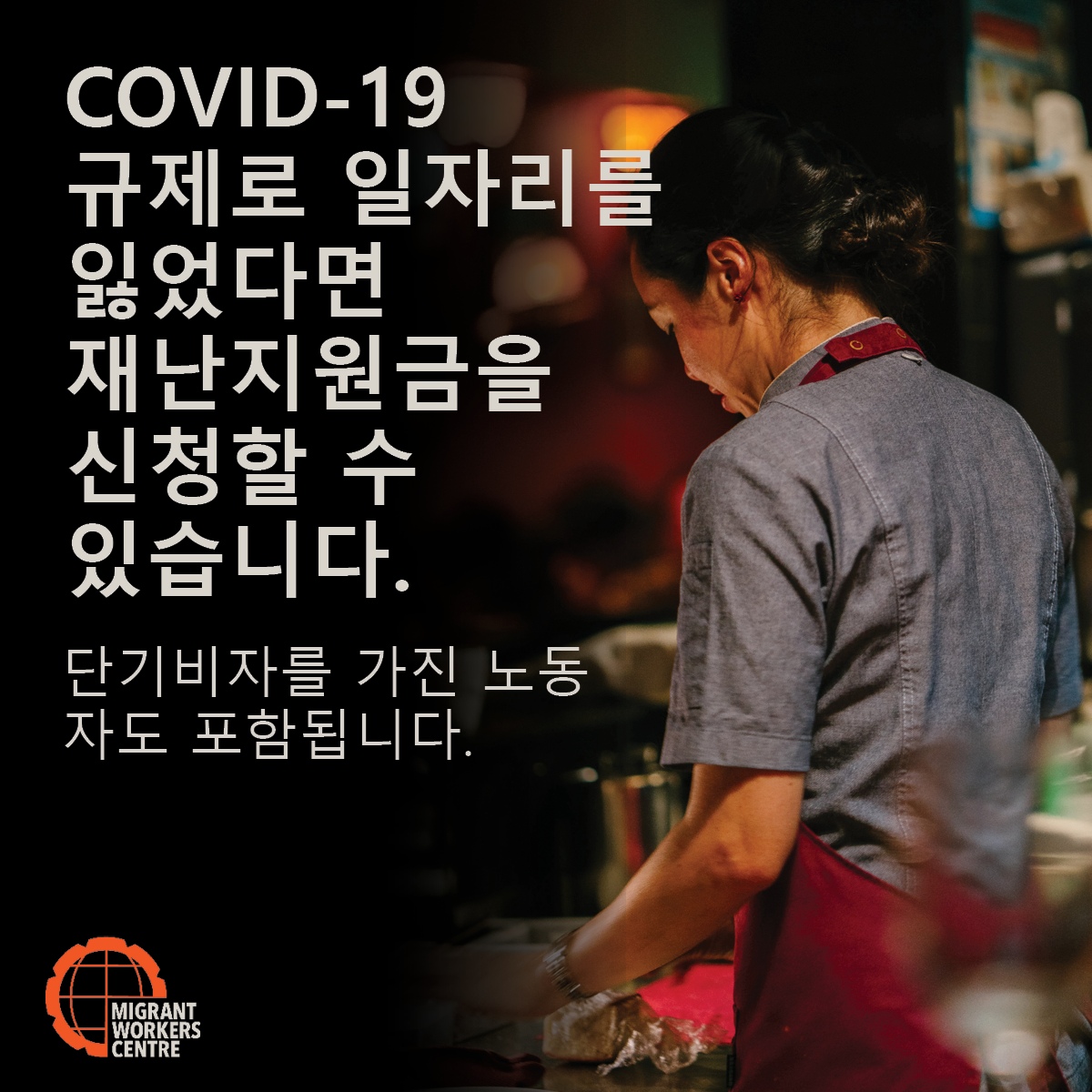 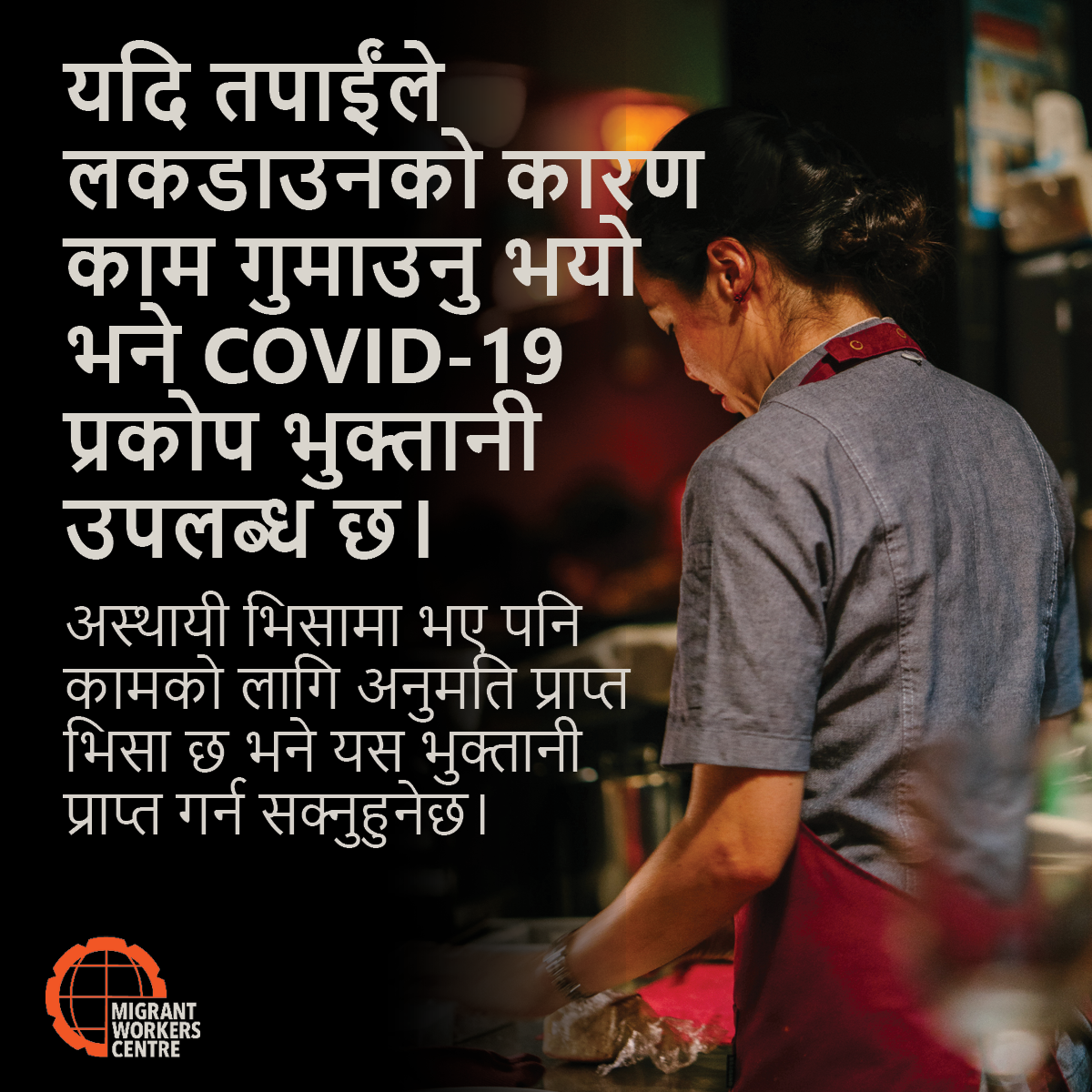 If you’re isolating as a close contact of someone who’s tested positive or while awaiting COVID test results, you should apply for the Pandemic Leave Disaster Payment instead.

Last month, we launched a research survey about the experiences and barriers faced by migrants in Australia. We’re collecting responses from anyone who has ever stayed on a visa in Australia. We want to know how your visa impacts your work, housing and social life, and what challenges you face when applying for visas. 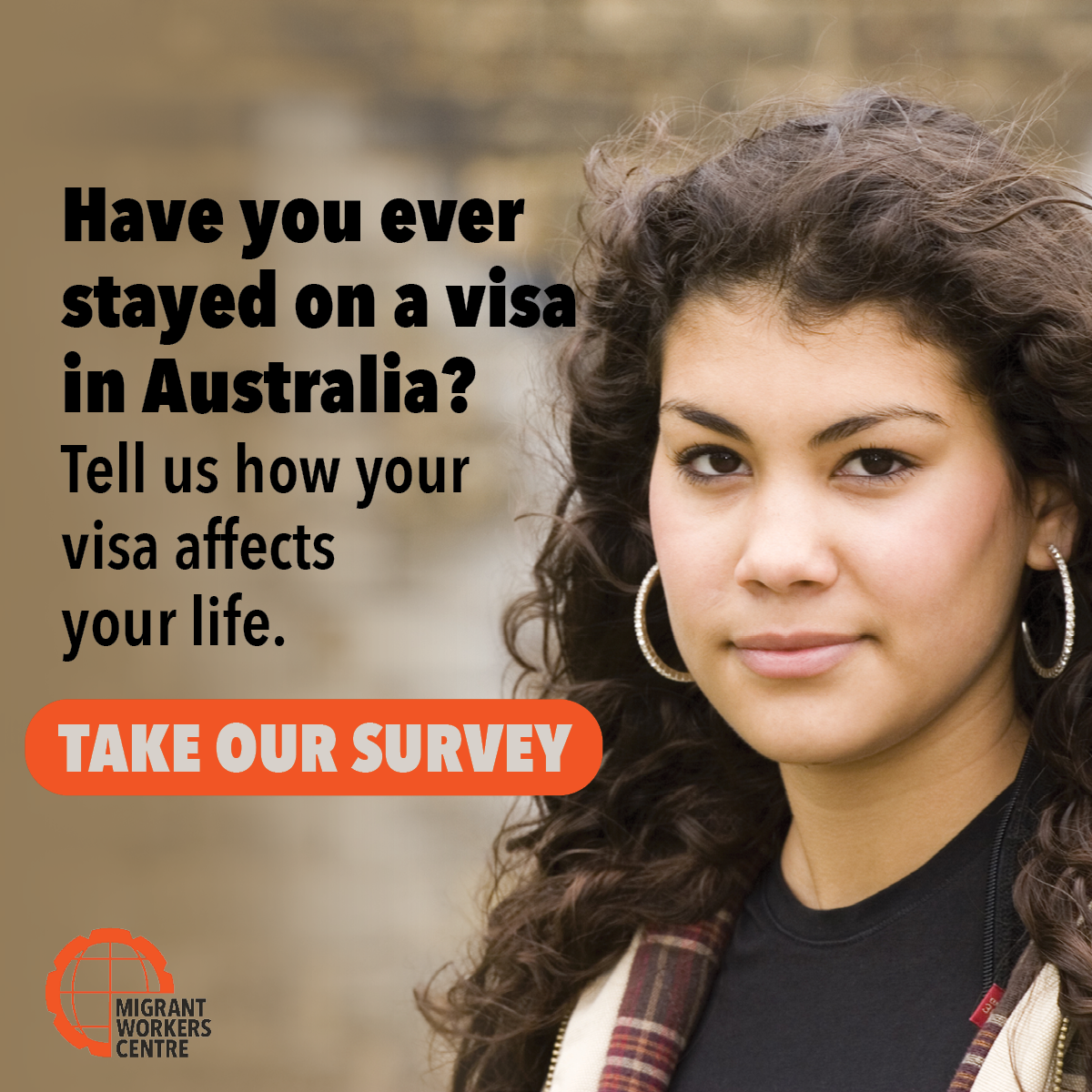 Right now, the Australian Government is reviewing Australia's migration programs and the Migrant Workers Centre is campaigning for more pathways to permanent residency and a fairer visa system. Responses to the survey will inform our policy recommendations and most importantly, help drive our campaign for pathways to permanency forwards.

Hande Denli, 35, is a Turkish migrant living in Australia on a Bridging Visa, who’s filled out our survey and shared her migration story. She works as a data analyst and is supported by her employer but her application for a 482 Temporary Skills Shortage visa was recently rejected after 10 months of waiting. She says, “Uncertainty is one of the things that really prevents you from focusing on your life. And you don’t feel safe and stable enough to really contribute to the community."

Click here to fill out our survey and join the campaign for permanent visas.

In June, the Migrant Workers Centre alongside Unions NSW published a damning report into piece rate payments and exploitation in the horticulture industry. Our survey of more than 1300 backpackers from over 52 countries revealed the majority of farm managers are engaging in rampant wage theft and outright abuse. 78% of workers surveyed had been underpaid, and some piece-rate workers averaged just $9 a day. 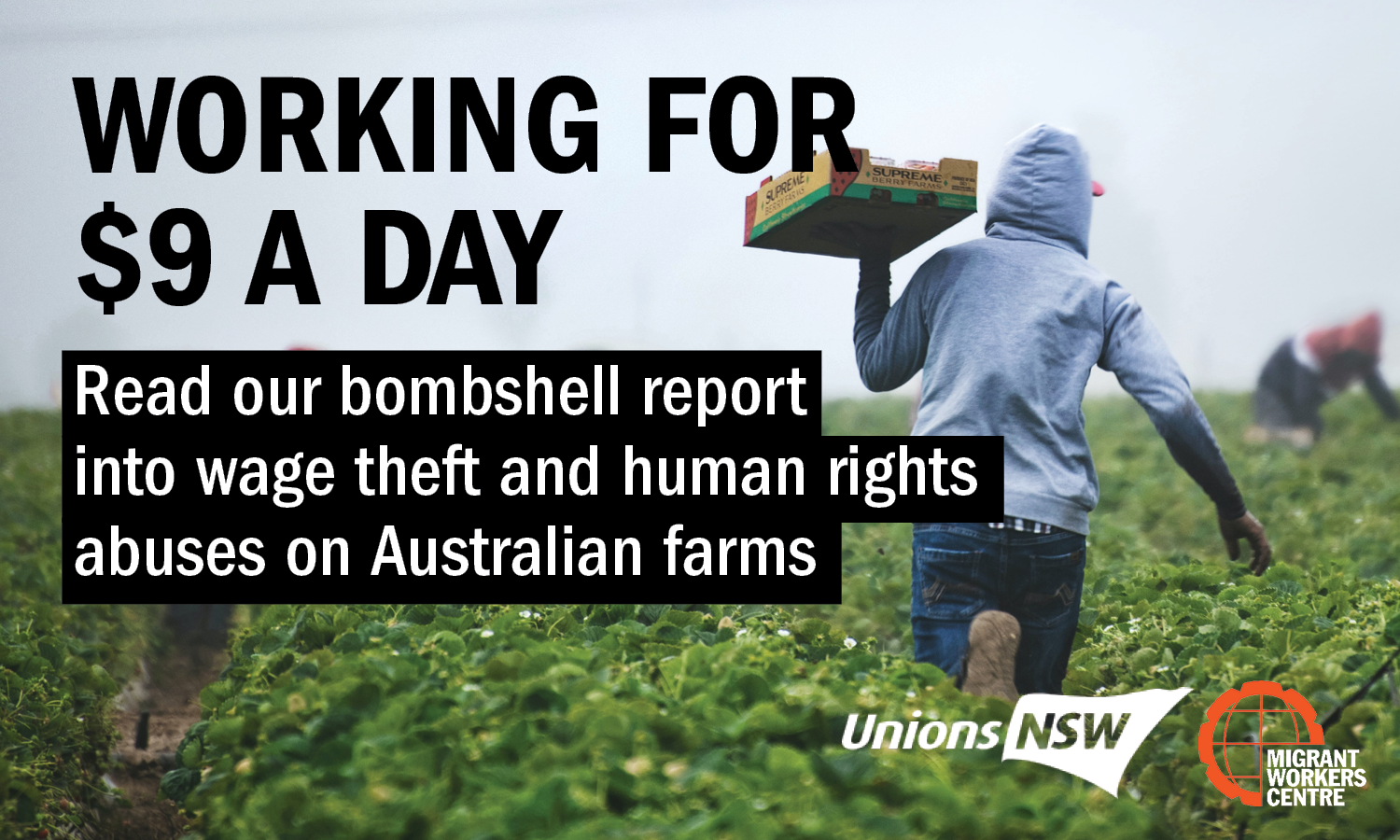 This report has had a huge impact, with stories in the media from SBS, ABC, The Australian and even overseas in The Daily Mail. Taiwanese farm worker Kate also took the fight to Canberra, meeting with MPs across political parties to deliver the report in person and share her story. 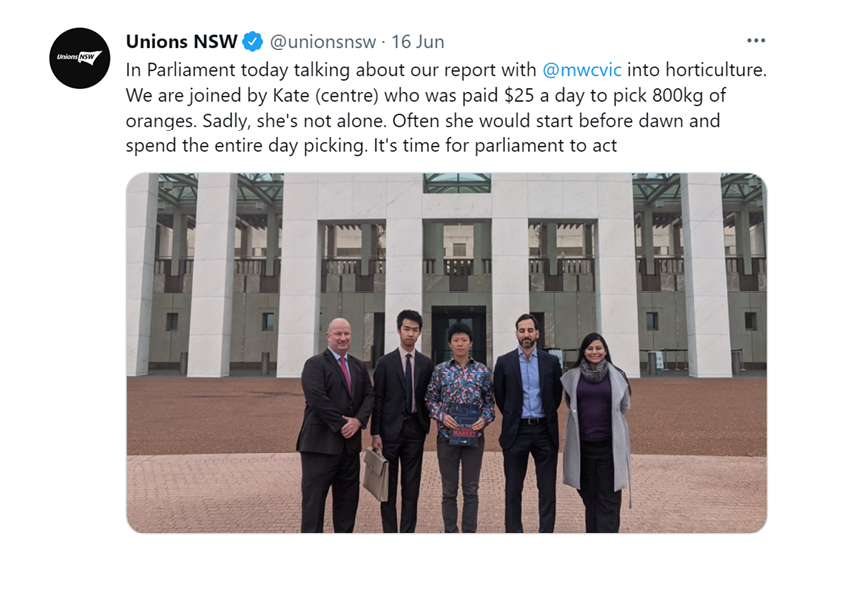 The Fair Work Commission is currently reviewing piece rate payments in the Horticulture Industry. Public hearings took place in July with unionists and farm workers like Kate speaking out about why we need a minimum wage. The FWC will be delivering their decision in the coming weeks. Help us keep up the pressure and sign the petition to end the exploitation on Australian farms.

Abbas* came to the Migrant Workers Centre for help after a physical assault by his supervisor left him hospitalised.

Abbas came to Australia in 2010 from Iraq. Despite living and working here for over a decade, he hasn’t been able to get a permanent visa. Instead, he was on a Safe Haven Enterprise Visa - a temporary visa that must be renewed every five years and which has extensive restrictions. Abbas got a job as a farm hand because he was trying to apply for another visa that required applicants to work in a regional area for three and a half years.

Abbas thought he’d finally found a pathway to a more certain future. But once he started on this job, he suffered ongoing abuse and bullying from his supervisor. Abbas and his supervisor were supposed to work together across eight farms but his supervisor forced him to do all the work and made racist remarks when Abbas spoke up.

Abbas says “I don’t mind if the work is hard. I want to work… but the supervisor didn’t let me take breaks. We are supposed to have a 30 minute break but he only let me take 10 minutes. Even just walking to the kitchen from the farm took 10 minutes so I had no break.”

“When I said it was not fair to put [all the work] on my shoulders, the supervisor is swearing at me and he said ‘if you don’t like it go home’.”

Abbas says in his opinion, “[the supervisor] treats me like a slave just because I am a refugee and English is my second language.” He explains, “There was someone else called Nick who used to work with us. Because Nick spoke the same language as the supervisor, he was treated better than me. I didn’t complain. I came for work and to support my family. But I believe he treated Nick better and didn’t discriminate against Nick.” 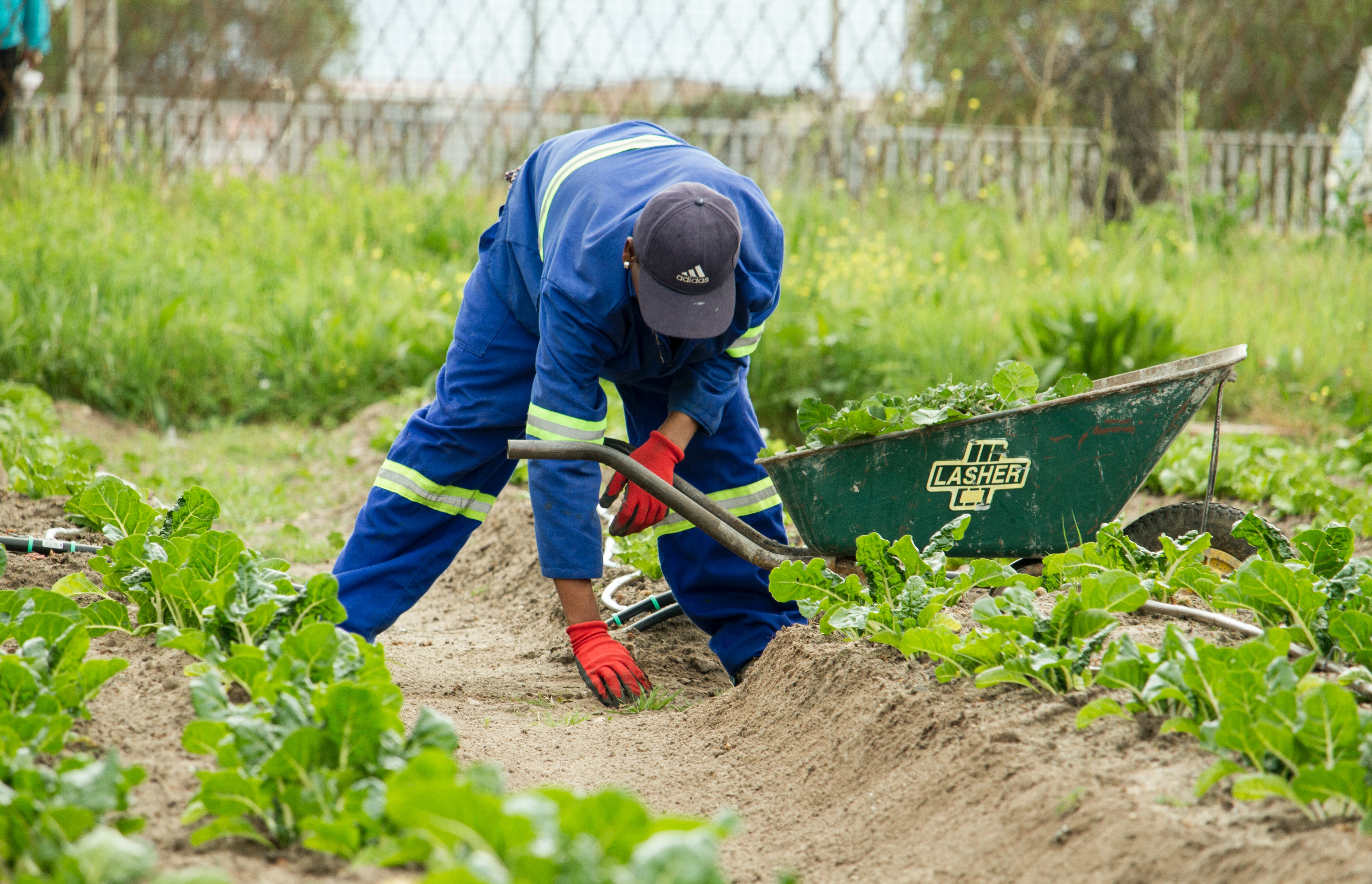 Despite the exploitative work conditions and abuse, Abbas stayed in the job to meet the regional work requirements for his visa application. He was also conscious that as a SHEV visa holder, his job opportunities were drastically limited as the majority of employers only want citizens or permanent residents.

However, it all came to a head one day when the bullying and abuse escalated and the supervisor physically assaulted Abbas, brutally beating him up. Abbas was hospitalised with extensive injuries that he’s still managing today. He says, “Mentally, physically he’s damaged me too much. People have to treat me as equal. There’s no reason to discriminate against me or bash me.”

Abbas heard about the Migrant Workers Centre through a friend. We assisted Abbas with applying for a WorkCover claim, liaising with the insurance company, and also provided information to him in Arabic. While hospital and ambulance fees in workplace instances like this are covered by insurance - information about this is often not known or accessible to migrant workers, leading to additional mental distress.

Abbas’ WorkCover claim has now been accepted and he’s receiving weekly payments that cover his medical costs and lost wages. But the impact of the bullying and assault is ongoing. Abbas now experiences suicidal ideation and says, “I cannot sleep from the pain - I cannot explain how this has affected my mental [health]. I now have trauma. I feel like he’s going to kill me. I feel not safe and scared.”

Abbas is receiving ongoing support for physical and mental injuries. He wants to tell his story as it’s an extreme but not isolated example of how prohibitive visa conditions can force workers into unsafe work environments with huge consequences. The Australian Government must provide more pathways to permanent residency and scrap the restrictive work requirements attached to most visas so migrants can find work that is safe, and can speak out about abusive work conditions without fear of losing their livelihoods or their visa.

The Migrant Workers Centre is currently campaigning for more pathways to permanency. You can sign our petition for visa reform here.

We’ve assisted twenty workers with contesting ATO repayment orders. So far, there’ve been successful recoveries for over a dozen workers amounting to over $100,000. Recoveries have ranged from $5,000 to nearly $18,000 each. Most workers approaching the MWC were either on a temporary protection visa or have applied for protection. Most say they are classified as sole traders because they are gig workers, with more than half of the total saying they are Uber drivers. Of the enquiries we have received, we understand most sought advice from a tax agent or the ATO before they originally applied for JobKeeper.

All the workers that have come to us for advice have had their repayment order wiped - revealing how migrant workers from non-English speaking backgrounds are unfairly penalised when there is a lack of accessible information. Our assistance includes providing basic information about the objection process, the objection form and what to address when offering reasons for the objection - based on publicly available ATO information. We provide much of this assistance in-language to empower workers to write and submit their own objections.

If you’ve been asked to repay JobKeeper money, you can get in touch with us here.

On the 1st of July, new wage theft laws came into effect in Victoria. These new laws mean bosses who withhold wages, or forge or fail to provide payslips can face huge fines and up to 10 years' jail time. This is a hard won victory by workers and their unions and Victorian Trades Hall Council who fought a long and hard campaign. We know migrant workers are disproportionately impacted by wage theft and face additional barriers to coming forwards such as fear of visa repercussions or difficulty finding another job due to barriers such as racial discrimination or language. Frustratingly, often when workers finally come forwards, wage theft can be challenging to prove because the employer has deliberately not provided payslips or provided forged payslips. These new laws are another step forwards for migrant workers fighting for fair pay and equal treatment at work. If you think you’re being underpaid, the Migrant Worker’s Centre can assist. Make an appointment with us here or click here to join your union.

A new High Court ruling has overturned a Federal Court decision last year that gave casual employees access to paid leave like sick leave and carer’s leave. Workers on temporary visas are more likely to be on casual contracts and this decision is a disappointing step backwards for workers everywhere. Lukas and Charlie are two workers and unionists who are fighting for fairer work conditions for other casual workers.

Lukas and Charlie have just finished the Young Workers’ Centre’s Union Winter internship program – and they’re fired up to campaign for a fairer deal for other casual workers.

Lukas, a waiter and proud Hospo Voice member, admits there have been times he’s worked casual shifts whilst being unwell, including going to work with tonsillitis. He needed the income, but he says that during COVID it was also “a psychological thing” of not wanting to let down his boss.

While Charlie underwent his apprenticeship, he worked at a servo and ran pizza deliveries to supplement his income and reflected on the difference it made when one of those jobs was permanent part-time. “It was so nice, just knowing I had those 10 hours a week permanently locked in, and the sick leave was there if I needed to take it,” he recalls.

You can read past editions of our newsletter here