Welcome to the March edition of the Migrant Workers Center newsletter! Here are the updates from the last month: 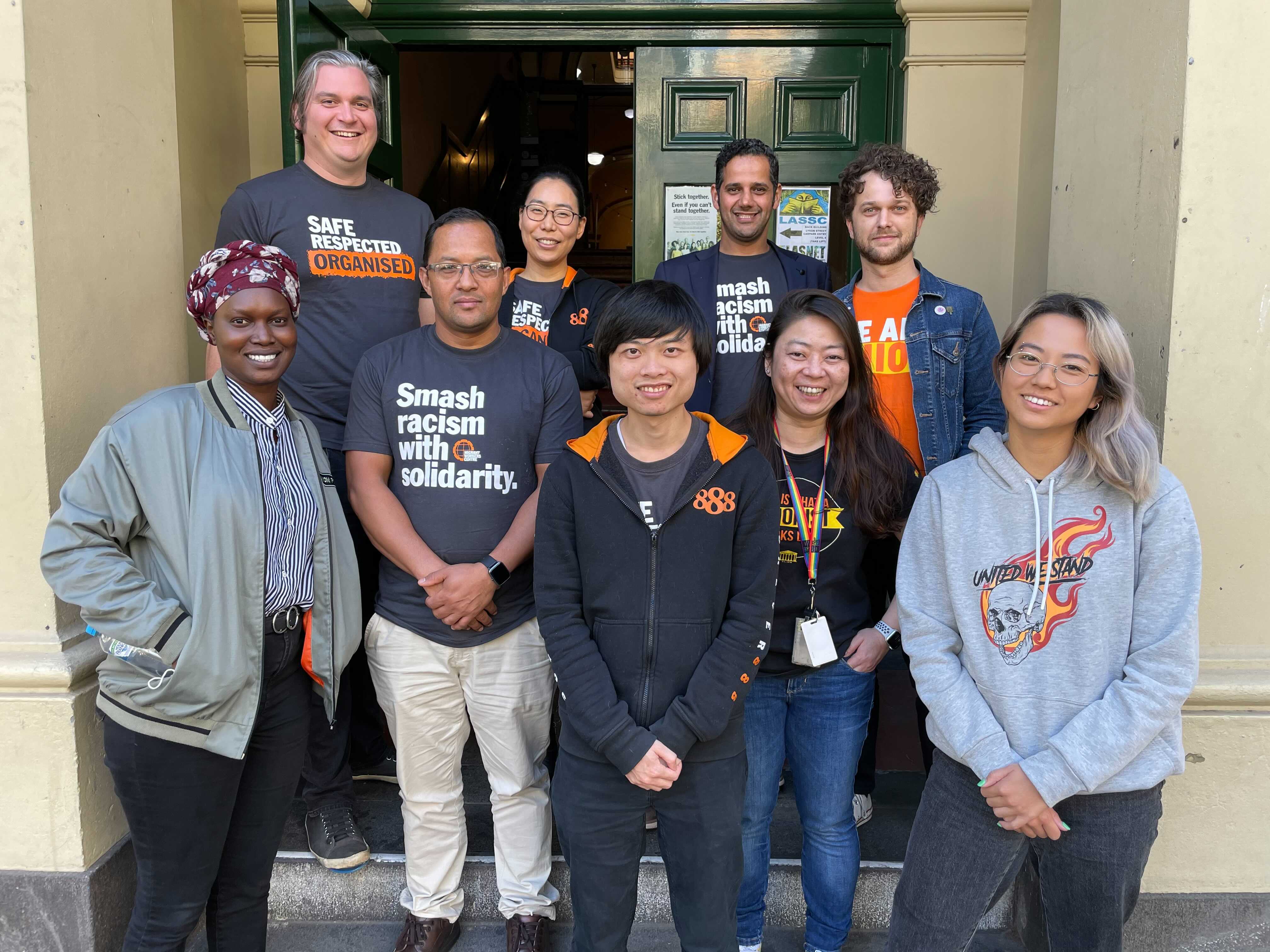 Mia is a former Australian Workers Union delegate. She’s passionate about fighting for migrants whose voices are often unheard, including for her community. Hari is a former United Workers Union delegate. He wants to fight for the rights for international students, having formerly been one himself and is an advocate for the Nepali community. Hassan is the founder of Justice for Refugees Victoria, a member of Refugee Action Collective and has been an organiser leading protests for refugee rights since 2016.

As always, if you have a workplace issue, you can click here to make an appointment with us. Appointments are now available again in person with COVID-19 safety protocols in place, and can be in English, Chinese, Spanish, Korean, Arabic, Nepali or Hindi.

Migrant Workers Centre organisers also present Know Your Rights sessions about workplace rights and protections for migrant workers. Click here to express your interest in booking a session and we will be in touch.

The Migrant Workers Centre and Migrant Worker Solidarity Network took to the streets last weekend for the annual Palm Sunday Walk for Justice for Refugees. We joined a coalition of refugee-led community groups, unions, faith groups and thousands from the wider community to demand the Morrison government free all people seeking asylum detained in Australia, grant permanent visas and extend social security nets to all temporary and bridging visa holders in our community. The rally started outside the State Library before we marched to the Park hotel in Carlton where men are still being imprisoned by the Morrison government. 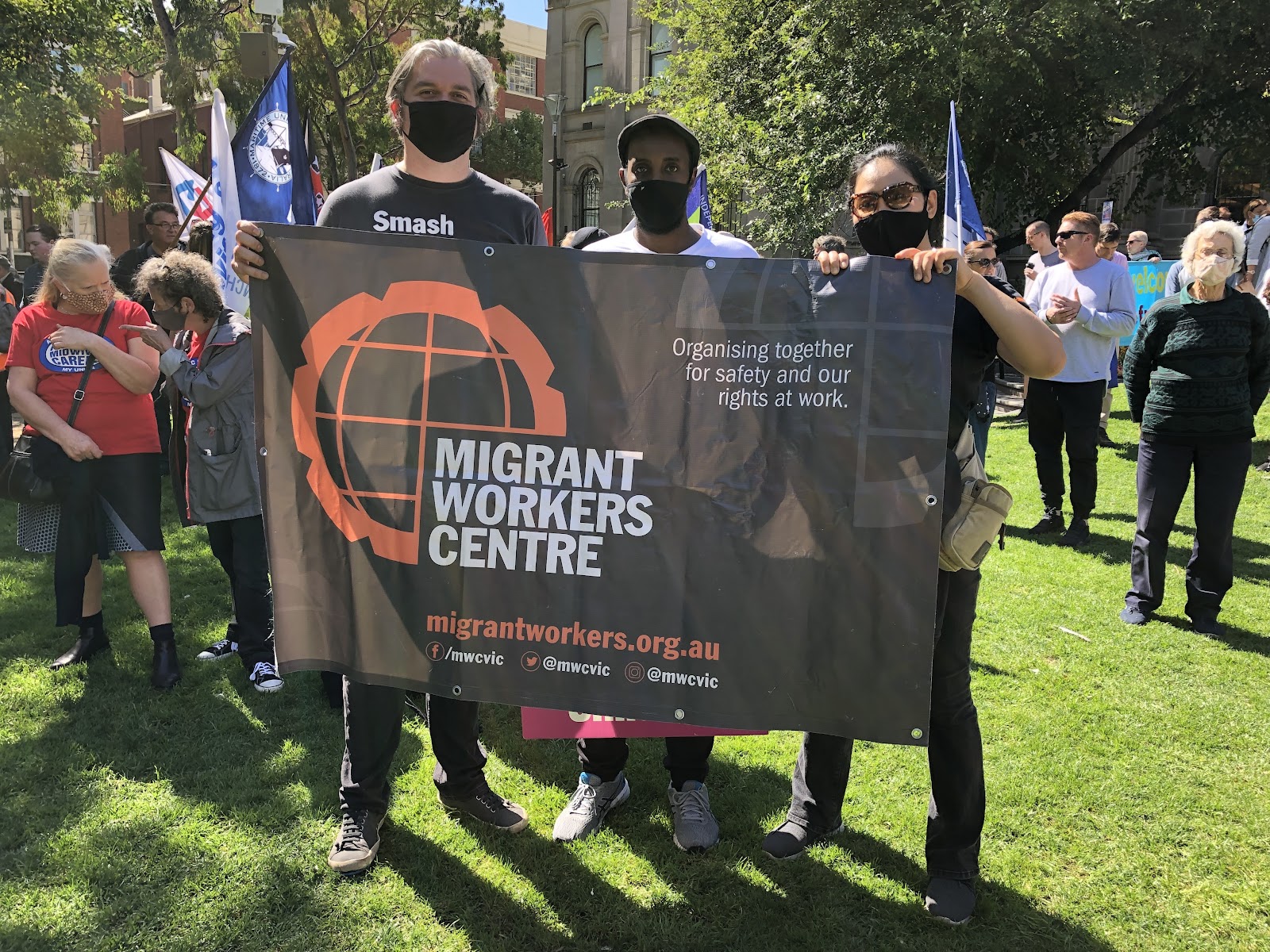 The Migrant Workers Centre at the March for Justice for Refugees

Daily protests and weekly sleepouts are still happening and you can find out more about supporting the campaign here.

Ravi* reclaimed $9,288.83 in stolen wages after fighting against his employer’s unfair and incorrect classification of him as an ‘independent contractor’.

Ravi, a 26 year old from India, came to Australia in 2019 with his wife who was studying. To make ends meet, he got a job as a truck driver with an on demand delivery company that operated in a gig economy model. His employer asked him to apply for an ABN (Australian Business Number) which is usually required for independent contractors who run their own business and set their own terms of work.

Sometimes employers seeking to take advantage of migrant workers will ask them to apply for an ABN instead of a Tax File Number to avoid paying award wages and entitlements.

Key factors in Ravi’s case that indicated he was an employee and not an independent contractor were:

Considering all these factors - Ravi should have been getting the Award rate for a casual transport worker of $26.46 an hour with 25% casual loading, plus penalty rates for weekends and overtime for long shifts. But not only was he being paid below this rate, his employer was also making incorrect and unfair deductions for ‘insurance’ and ‘tolls’. He was also forced to pay for a portion of the fuel for the business’ vehicle.

After hearing about the Migrant Workers Centre from a friend, Ravi came to the Centre for a meeting. Migrant Workers Centre organisers confirmed Ravi's suspicions about his employer's practices. Organisers were also delighted to discover that Ravi had kept meticulous records of his hours, pay, and conversations with his employer. Ravi’s boss realised Ravi not only had proof he was an employee rather than an independent contractor, but that he also understood his rights as a worker and wasn’t afraid to fight for what he was owed. The boss soon agreed to pay back the stolen wages and Ravi was able to reclaim the full $9288.83 he was owed.

Migrant Workers Centre takes to the streets against gendered violence.

March was a big month of action as the Migrant Workers Centre marched alongside Trades Hall and the union movement for the International Women’s Day rally and then the March4Justice demanding an end to gendered violence, sexual harassment and bullying in the work place.

In the build up to the events, the Women's team phonebanked union members to turn out numbers on the day. Leading on from the rallies, Trades Hall is organising the union movement to fight for gender equality in the workplace. Last year, the Respect at Work report was published after a national inquiry into sexual harassment. The report made 55 recommendations to change workplace culture and give women the tools and systems to report, fight and prevent sexual harassment in the workplace.  None of the recommendations have yet been actioned by the Morrison government.

Like most issues faced by workers, the challenges around fighting gendered violence and harassment at work are compounded for migrant workers who are more likely to be in casual work without leave, and can face additional job insecurity. These factors make reporting sexual and gendered violence even more challenging. 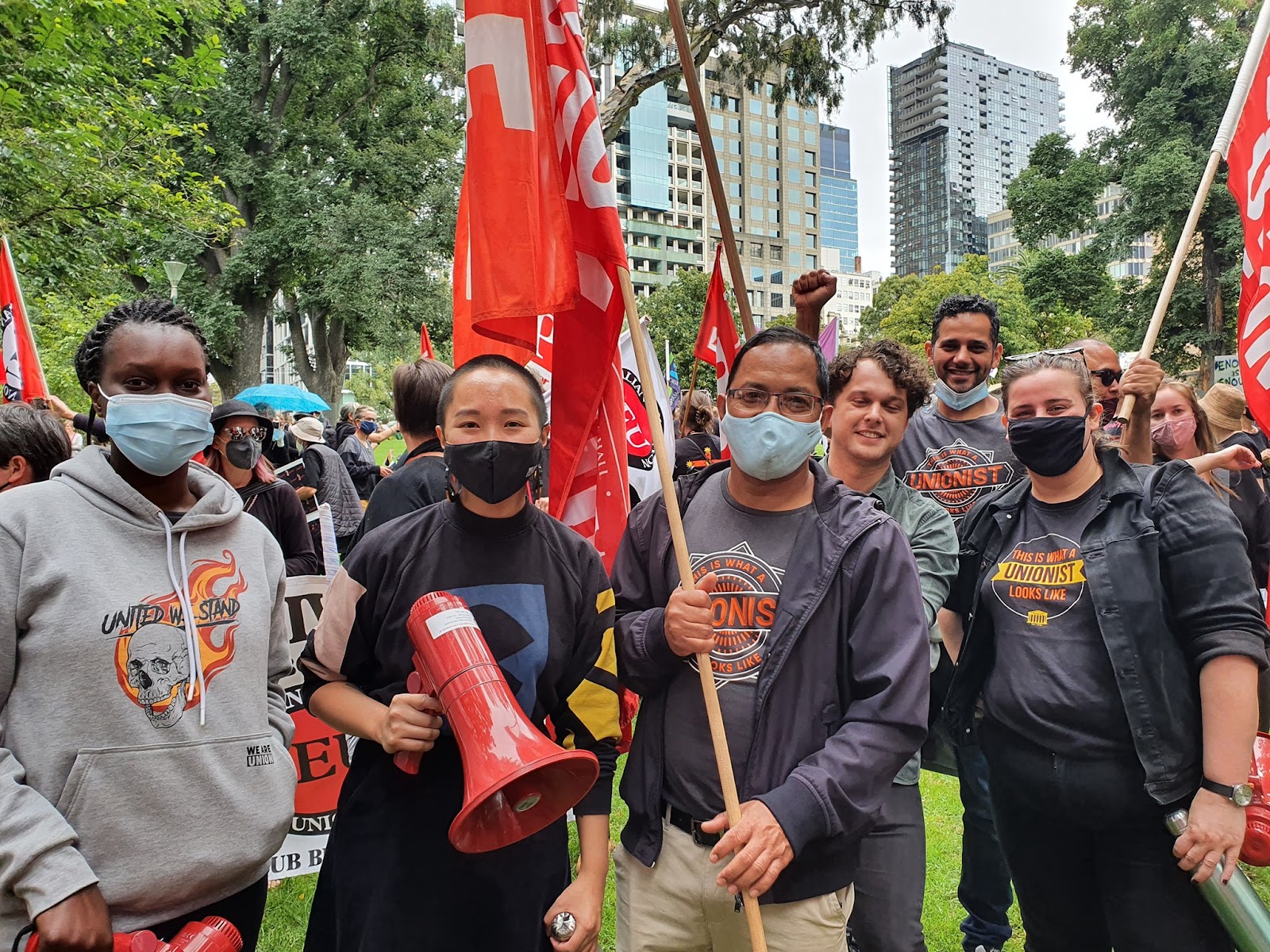 Migrant Workers Centre and Trades Hall organisers at the March4Justice

You can click here to read the stories of UWU members and join the campaign.

Delivery riders working for gig companies have long been fighting to improve their work conditions. This month, in a milestone for the campaign for gig workers, delivery riders at Hungry Panda won pay increases and the reinstatement of two workers who were fired after protesting pay cuts. The Transport Workers Union had assisted the workers in their unfair dismissal cases. Hungry Panda has now committed to ongoing negotiations with union members over rider safety.

There’s still a long road ahead to reform the gig industry for workers, but this win sets a strong precedent. If you’re a driver or rider in the gig economy, you can join the Transport Workers Union here.