Over March and April, the Migrant Workers Centre has been supporting migrant workers affected by the economic impacts of COVID-19.

This edition of the newsletter includes

There are 1.1 million migrant workers in Australia. Temporary migrant workers and international students make up 10 percent of our workforce and are more likely to be in insecure work and experience wage theft. Any response to COVID-19 must include the most vulnerable workers in our society.

In response to the impacts of COVID-19, the Migrant Workers Centre called on the Morrison Government to:

We launched an online form asking impacted workers to share their stories with us. There were over 1500 responses in the first 48 hours. International Students and Working Holiday Makers where the biggest demographics impacted and over half of the respondents had worked in casual roles for less than 6 months - highlighting the precariousness of work for temporary visa holders.

The Migrant Solidarity Network has been busy in action driving this campaign. The network has made coordinated calls into talkback radio, and filmed videos about why we need a wage subsidy for all in different languages as part of an online social media campaign. If you would like to get involved with the Migrant Solidarity Network, you can sign up to volunteer here.

Alongside Victorian Trades Hall Council (VTHC) and the Australian Council of Trade Unions (ACTU), the Migrant Workers Centre has been campaigning for a wage subsidy for every worker as part of the #WageSubsidyForAll campaign. We held the world’s first online picket line - a day long Facebook live marathon where we spoke to impacted workers, and took actions like calling MPs. The Migrant Workers Centre and VTHC spearheaded a joint statement with 124 business groups, community organisations and faith groups calling for all workers to be included in the wage subsidy.

Devastatingly, the Government passed the JobKeeper bill voting down amendments that would include temporary visa holders and casual workers in the wage subsidy. But the fight isn’t over as the bill grants treasurer Josh Frydenberg the discretion to extend eligibility to all workers. The Migrant Workers Centre and Migrant Solidarity Network will continue to fight until every worker receives the support and dignity they deserve.

Translated resources
The Migrant Workers Centre has developed translated resources to allow people to lend a helping hand to others in their community. We created a conversation cipher to help people assist neighbours who don’t speak the same language. Click here to download. 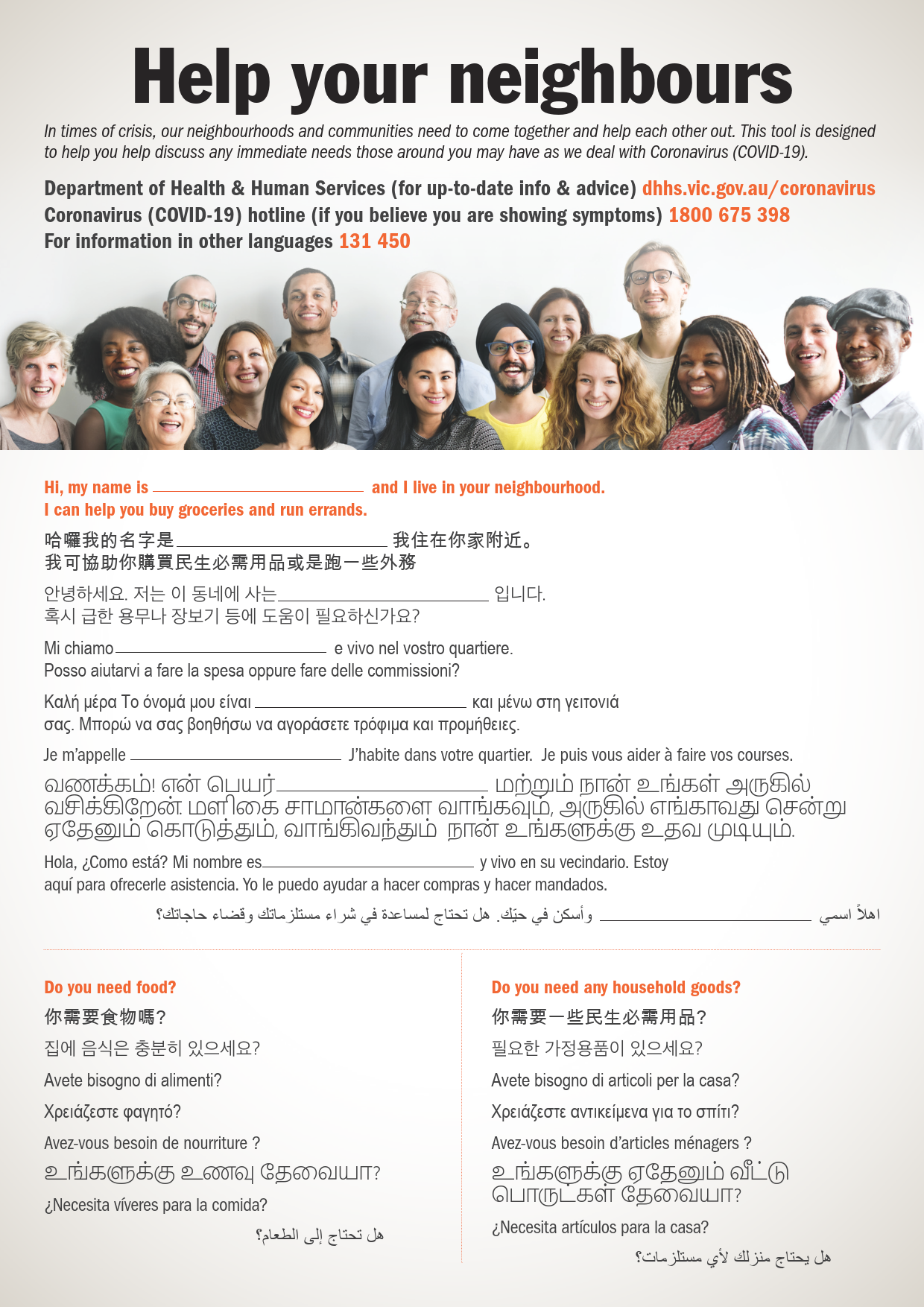 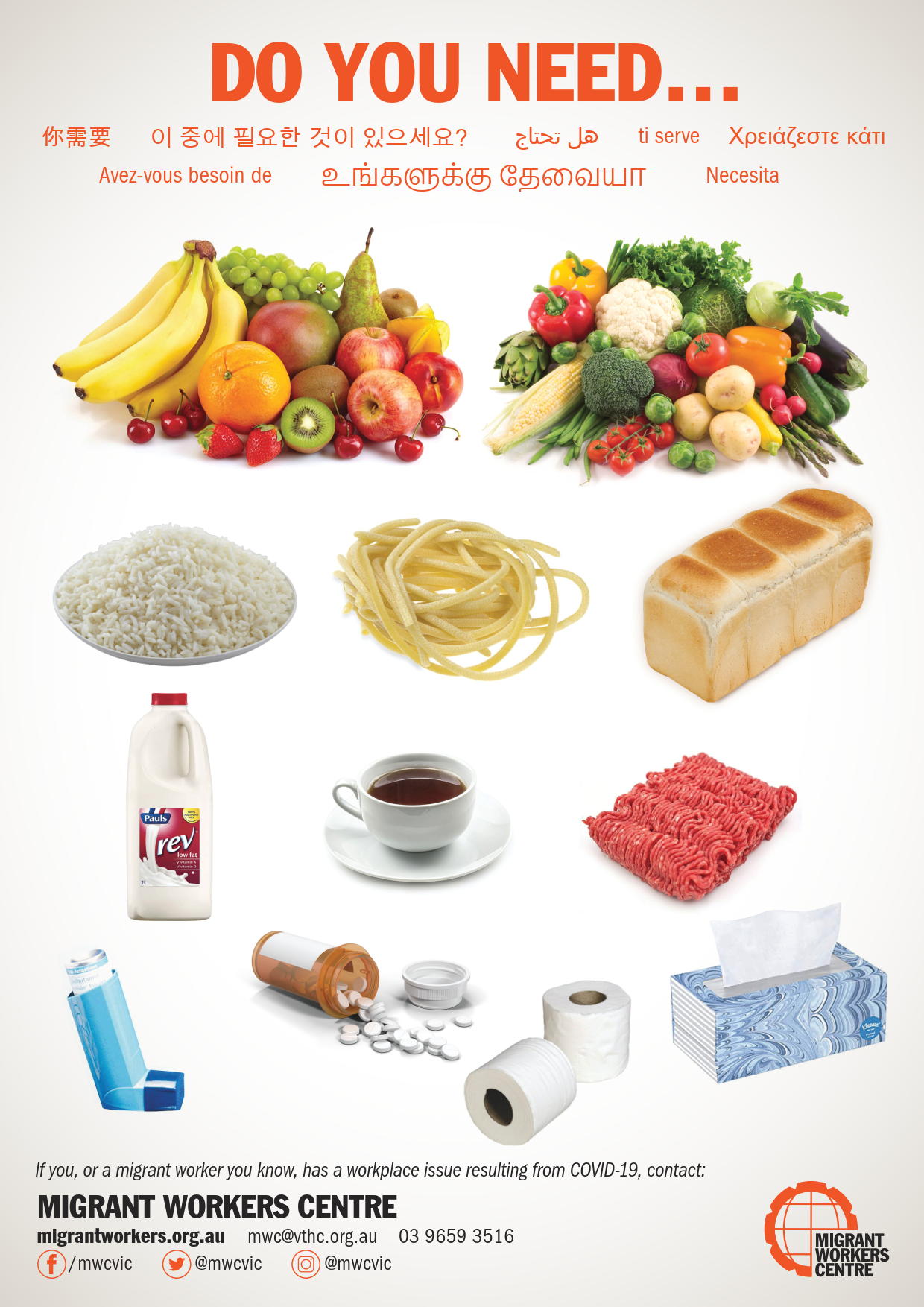 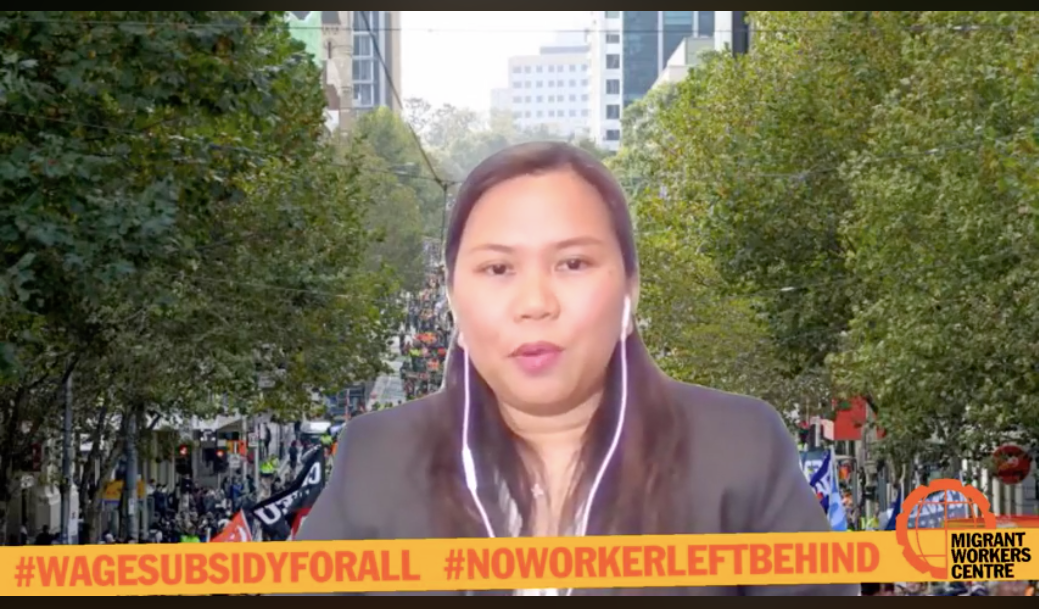 Worker Stories and MWC in the media
As part of the #NoWorkerLeftBehind campaign, we’ve been supporting affected workers to share their stories in the media. Congratulations to everyone who courageously stepped up and shared their experience. By flooding the media with personal stories, and putting faces to the statistics - we’re showing the human cost of excluding over 1.1 million people from government support. We’ve also been reaching communities in different languages through SBS interviews in Spanish, Arabic, Korean and Mandarin.

Here are some of the stories we saw: 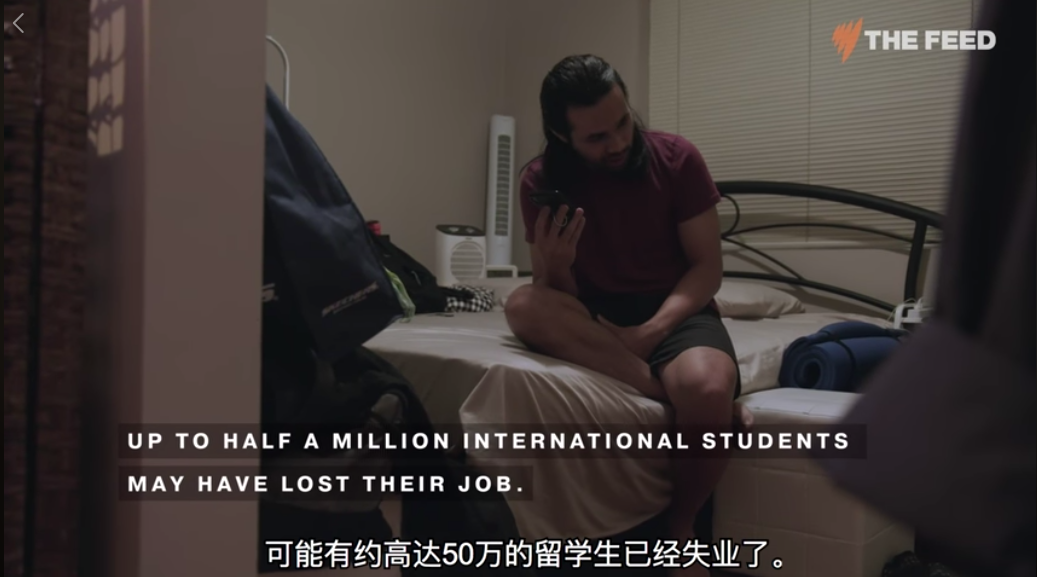 Aaren, an international student and hospitality worker who has lost shifts, speaking on SBS The Feed.

Alejandro Cardozo Zarate from Colombia has lived in Australia for 9 years and calls Townsville home. He worked as a chef but lost his job due to COVID-19. Because he's on a temporary visa, he's ineligible for any government support or the JobKeeper wage subsidy. Now he has no income but still needs to support his family and pay for private health insurance which is a condition of his visa. 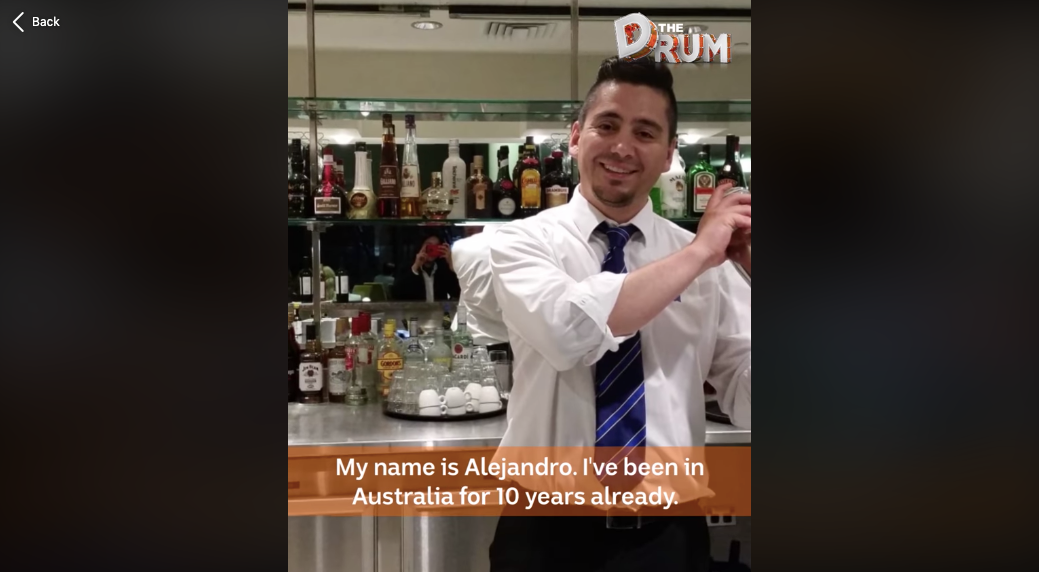 Alejandro speaking on The Drum.

United Workers Union: action for undocumented workers
The United Workers Union (UWU) is calling for urgent action to protect and resolve the visa status of undocumented migrant workers on Australian farms during the COVID-19 crisis. There’s an estimated 100,000 undocumented workers in Australia, mostly working in our horticulture industry. UWU's demands include resolving the status of undocumented workers to allow them to live and work here legally, end visa enforcement and detention actions targeting farm workers, and removing requirements around work restrictions and requirements so migrant workers don’t face additional barriers during this time. You can read more about the campaign here.

International Women’s Day event
Earlier in March, the Migrant Workers Centre held an International Sisterhood Workshop as part of International Women's day. Women from all cultural backgrounds were invited to attend, and packed into the newly refurbished Solidarity Hall for a day of speaking panels and workshops. Speakers included United Workers Union Organiser Putri Nazeri, CFMEU Organiser Stephanie Rabusa, Dr Niro Kandasamy, and Azmeena Hussain from Maurice Blackburn lawyers. Attendees discussed the barriers women faced at work and in the community, and the role of unions in empowering migrant women at work. 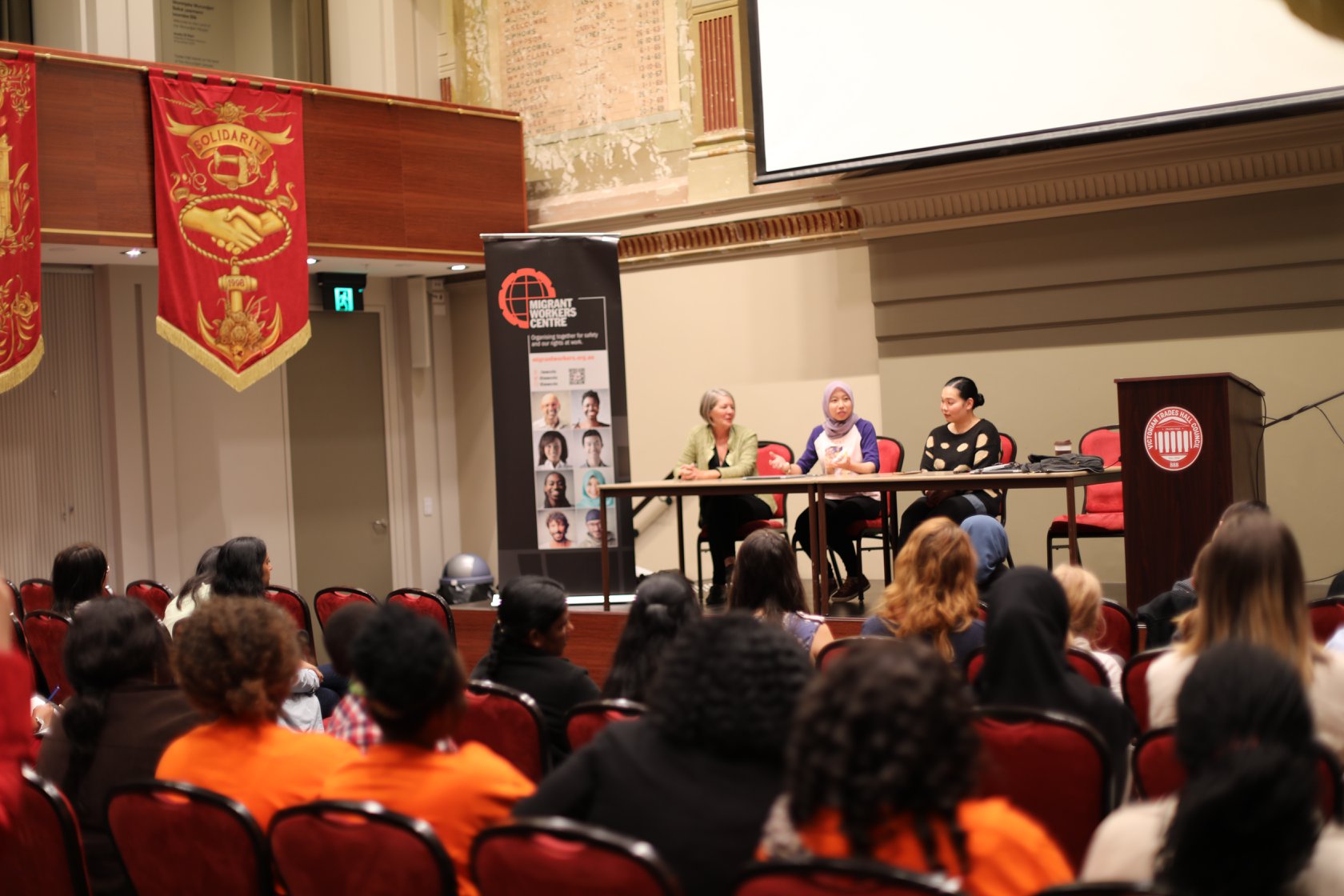 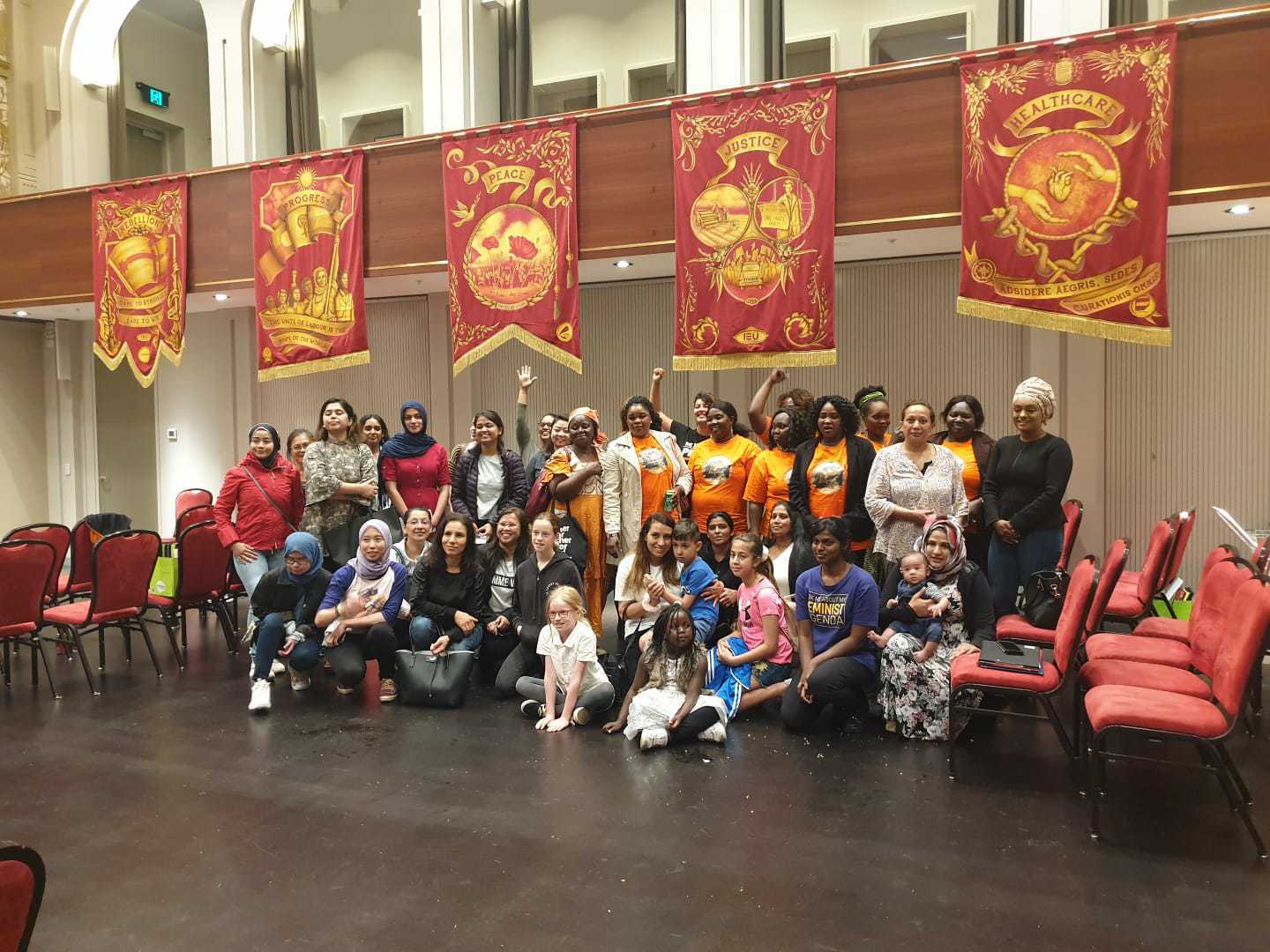