The September edition of the Migrant Workers Centre newsletter includes updates about:

Increase to the Emergency Hardship Fund Payment
The Victorian Government has doubled funding for the Emergency Hardship Fund. This increase in funding is a welcome step forward as the State Government seeks to fill the gaping hole left by the Morrison Government’s failure to provide meaningful support for migrant workers. Temporary visa holders and undocumented migrants in Victoria with limited income and savings are now eligible for an $800 payment. Previous recipients of the program are now eligible for an additional $400. Visit the Red Cross page to apply for the fund or the additional $400 payment.

Working Holiday Maker Inquiry Interim Report
The Joint Standing Committee on Migration has released a draft interim report on the inquiry into the Working Holiday Maker program. Disappointingly, only 1 of the 10 recommendations in the report address the endemic issue of worker exploitation in the agricultural and horticultural industries. Our submission to the Inquiry earlier this year made numerous recommendations for tackling the systemic exploitation of working holiday makers - most notably calling for the abolishment of the regional work requirements for the second and third year of the visa and reforming the labour hire industry which allows employers to circumvent their obligations of workplace rights and entitlements.

More alarmingly, the Migrant Workers Centre is acutely concerned about the Committee’s proposals to expand the regional work program to other temporary visa holders including international students and temporary protection visa holders without first tackling the clear problems of exploitation and abuse. The Migrant Workers Centre has called on the Committee to review the proposals. We’ve also been supporting working holiday makers who’ve experienced exploitation and wage theft to share their stories in the media and center workers’ voices in the issue.

Worker Story: Xuan Na speaks out and recovers $12,400 in stolen wages.
A strawberry farm in sunny Bundaberg would seem, at first glance, an idyllic working environment for a working holiday maker. Xuan Na never expected to be ripped off to the tune of $12,400.

Xuan Na came to Australia in 2017 and over the past three years, worked at numerous farms across Queensland. It was on a strawberry farm in Bundaberg where Xuan was trying to meet the regional work requirements for her visa where she experienced egregious wage theft.

At the strawberry farm, Xuan was paid a flat rate of $17 per hour for 40 hours of work per week - below the minimum wage. Her employer also forced her to pay them $160/week in “rent” to live in a cramped house with 7 other workers. It’s illegal for employers to force workers to rent or live at a specific residence.

Xuan says her experience was typical of all the workers at the farm, “Other workers are also owed unpaid wages -  we were all backpackers.”

Despite these conditions, Xuan managed to fulfill the requirements for the third year of her visa. It was only upon coming to Melbourne that Xuan realised how badly she had been taken advantage of.

She discovered the Migrant Workers Centre when she saw our Backpackers Mass Meeting advertised online. At this meeting of activists, she took the opportunity to share her experience with other working holiday makers. From hearing others’ stories - Xuan realised she had been underpaid. Eager to fight for the entitlements she was owed, she made an appointment with an organiser at the Centre to seek more information about her workplace rights. Migrant Workers Centre organisers assisted her with an underpayment calculation and lodged a complaint with the Fair Work Ombudsman. 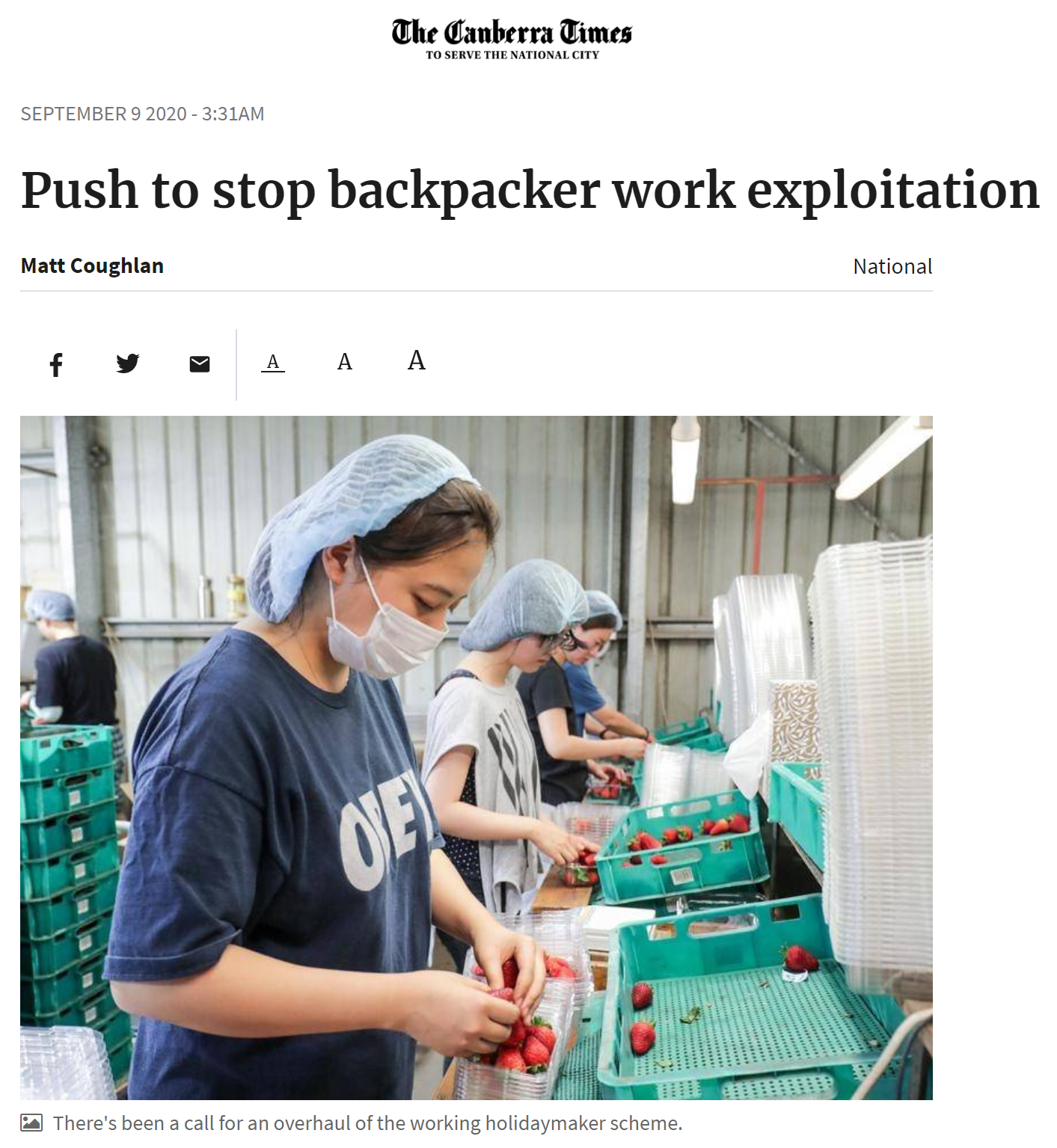 However, it wasn’t until Xuan took another step and boldly shared her story with the media that she quickly got a response. The day after her story was published in The Canberra Times, the Fair Work Ombudsman contacted the Migrant Workers Centre and notified us that the employer admitted to underpaying Xuan $12,400 and has now begun repaying her the full amount.

If you think you’re being underpaid or experiencing any other workplace issue, you can click here to make an appointment with the Migrant Workers Centre.

Post-Study Work Visa Forum
Last Tuesday, the Migrant Workers Centre held our second online information session for international students - this time focusing on Post-Study Work Visas. Presented by migration specialist Sanmati Verma, the session covered up to date information about post study work visa requirements and application processes. If you missed the session but would like to receive the slideshow of the presentation, fill out this Typeform and we’ll send through the resources when it’s ready.

Young Workers Centre: Gig Worker Survey
The Victorian government is currently looking to better regulate the gig work industry. The Young Workers Centre is preparing a submission calling for fairer, safer and more secure conditions for gig workers. If you work or have previously worked through Uber, Deliveroo, Airtasker or any other gig work platform - fill out this survey and share what would make gig work better for you. 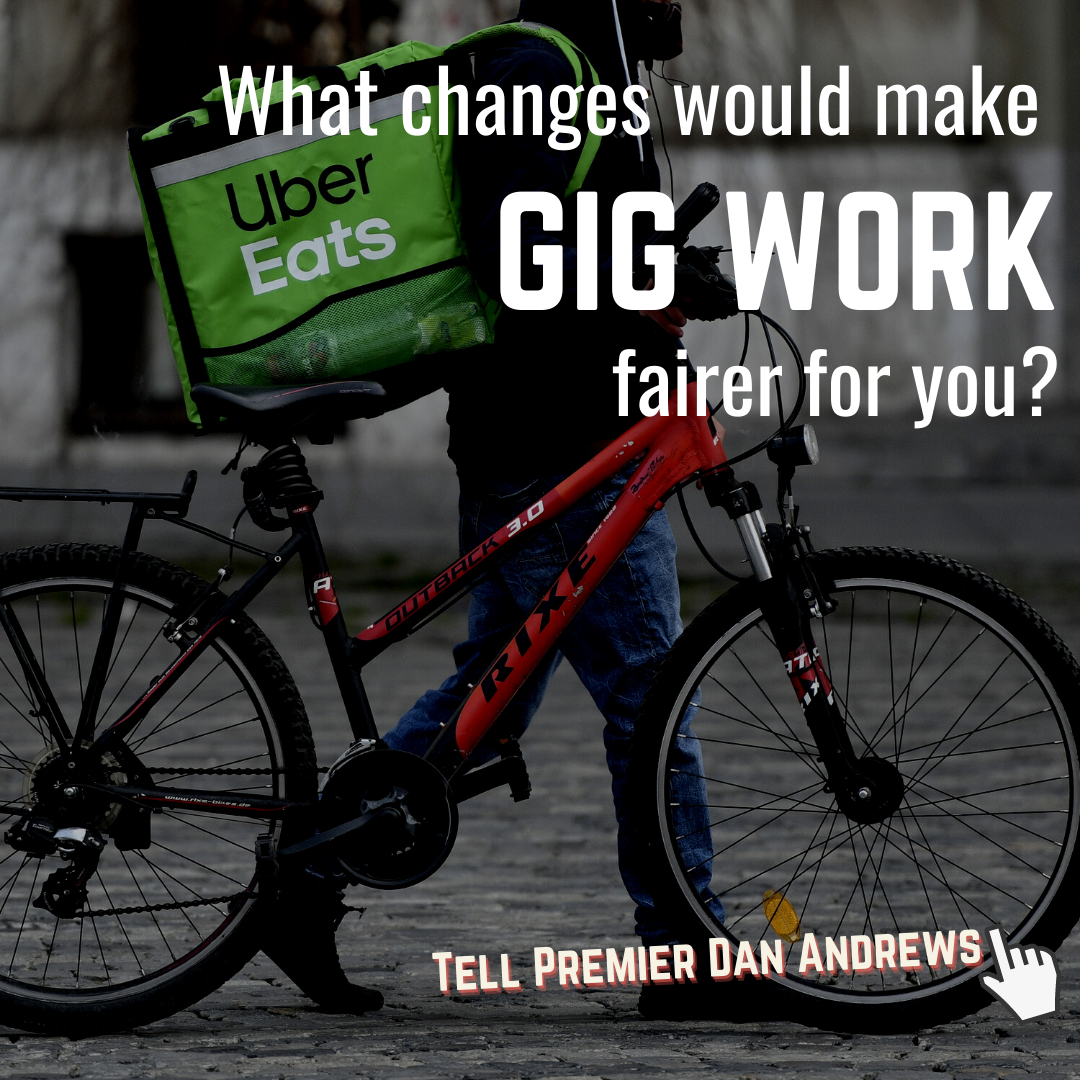 We know migrant workers make up a huge portion of the gig industry. For too long, gig workers have been ripped off, exploited, and injured on the job by platforms that categorise workers as ‘independent contractors’ in order to avoid minimum wage and workplace safety laws. This a huge opportunity to finally fix the rampant wage violations, dodgy employment arrangements, and unsafe working conditions in the gig economy in Victoria.

Migrante’s Support Network for International Students Launch
This month, the Migrant Workers Centre joined the launch of Migrante’s new Support Network for International Students (SNIS). Migrante is a Victoria based Filipino community organisation. This new network brings together nearly two dozen community groups and organisations to better advocate for and support international students. Migrante set up the network in recognition of the unique challenges international students were facing during COVID-19 and the Migrant Workers Centre is looking forward to working with this new coalition of community groups.

HACSU - Australia’s First Reproductive Health and Wellbeing Leave Claim
In a historic first in Australia, the Health and Community Services Union in Victoria has put forward a Reproductive Health and Wellbeing Leave claim to employers in the Victoria Hospitals’ Industrial Association. This claim would enable workers to take up to five days leave per year for reproductive health related reasons such as  IVF, endometriosis, vasectomies, serious menstrual pain, symptoms and treatments linked to menopause, Polycystic Ovary Syndrome and gender affirming procedures.

This new leave entitlement is backed by the Australian Council of Trade Unions. Its intention is to remove stigma around reproductive health and was introduced in recognition of health procedures that disproportionately affect women, transgender and gender diverse people who often have to use annual or sick leave.

This new leave entitlement will be of benefit to migrant workers as many temporary visa holders are locked out of Australia’s public healthcare system. Additional leave entitlements for reproductive health means migrants won’t be left further out of pocket for reproductive health reasons. Migrant workers also already frequently face exacerbated barriers in the workplace due to racism or their visa status, and this is doubly true for gender diverse, transgender and women migrants. These additional workplace entitlements will put more power in the hands of migrant workers to advocate for workplace rights.

Read past editions of our newsletter here.