The June-July edition of the Migrant Workers Centre newsletter features:

Following the sudden full lockdown of nine public housing buildings in Melbourne last week, the Migrant Workers Centre quickly moved to support the residents - the majority of whom were from migrant backgrounds. The sudden lockdown meant residents were unable to go to work, did not have a chance to give notice to their employers and were at risk of losing their jobs.

The Migrant Workers Centre produced resources about Pandemic Leave rights which have been translated into 12 languages including Amharic, Arabic, Chinese, Filipino, French, Korean, Oromo, Somali, Spanish, Tamil, Tigrinya and Vietnamese. You can access the resources here. Workers who have been impacted by the lockdown can fill out this online form to seek assistance from the Migrant Workers Centre.

The Migrant Workers Centre also worked with community groups on the ground including AMSSA and ASRC to help deliver meals and groceries to residents inside the buildings. While the full lockdown has been lifted from eight of the nine buildings, we’re supporting workers who have consequently suffered ongoing impacts to their employment, as well as the residents of 33 Alfred Street which is still under full lockdown.

Reflecting on 2 years at the Migrant Workers Centre

June 2020 marks the second anniversary since the Migrant Workers Centre was established. Over the past two years, the centre has assisted 500 workers and helped recover over $700,000 in stolen wages and entitlements.

While migrant workers are disproportionately impacted by wage theft, large recoveries of stolen entitlements show that there are avenues for migrant workers to fight for their rights. Darren, a Taiwanese backpacker, contacted the Migrant Workers Centre for assistance after being paid only $13-$14 per hour in his hospo job. Darren was able to organise his workplace and recovered $12,000 in stolen wages. 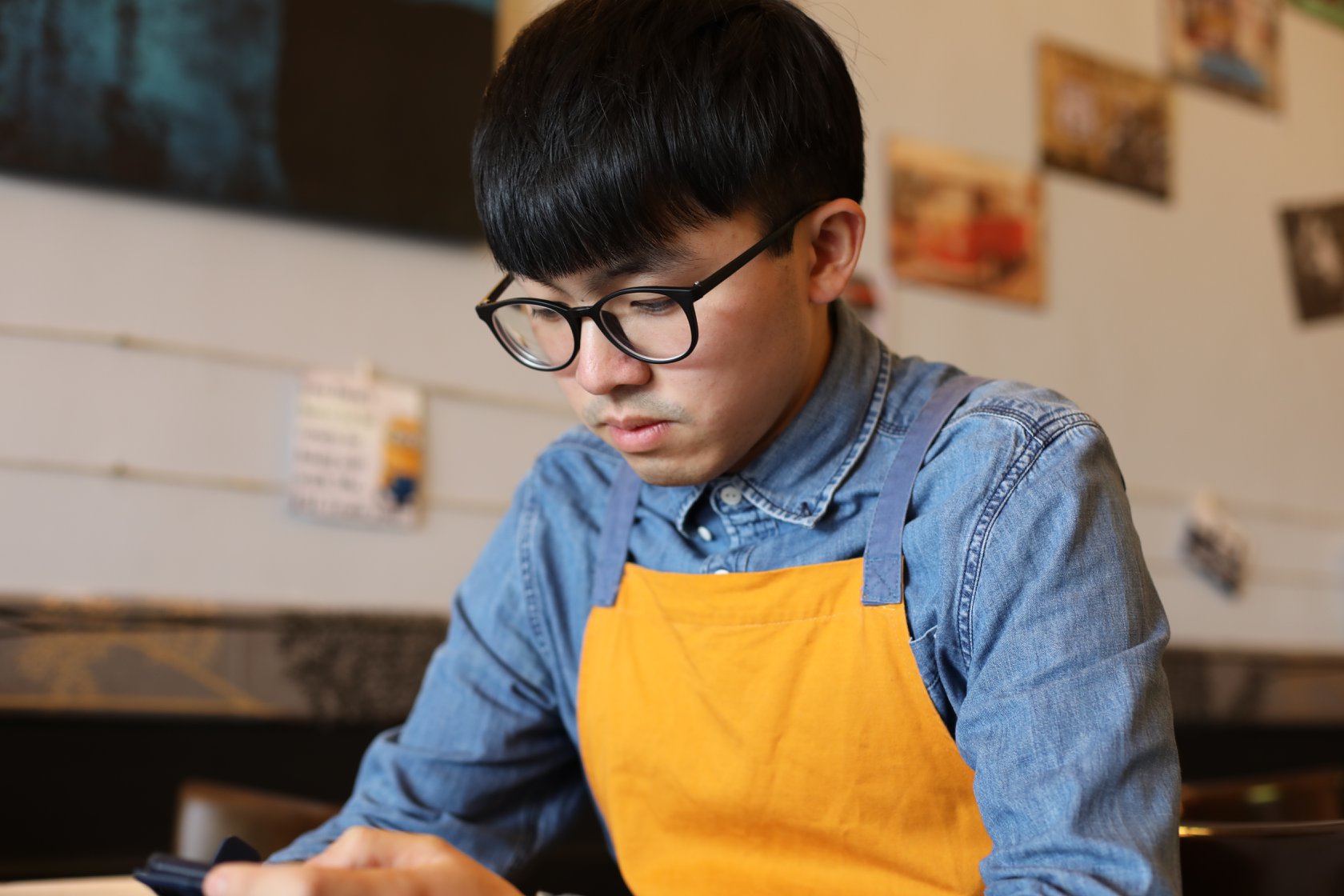 More recently, over a dozen backpackers at a farm that supplies major supermarkets successfully recovered three months of back-pay. The workers had been bullied and racially abused by their boss who hadn't paid them any wages at all, and were resorting to eating food that had fallen off delivery trucks. Jarvis, one of the workers, said they initially didn’t speak up because they were afraid it would impact their future work prospects in Australia. However, after contacting the Migrant Workers’ Centre for assistance, they collectively demanded their pay and were able to recover all their stolen wages.

In addition to assisting workers, since our inception the Migrant Workers Centre has held 157 Know Your Rights information sessions in partnership with unions and dozens of community organisations informing migrant workers of their employment rights. In the last year, the Migrant Workers Centre also launched the Multicultural Safety Ambassadors Program. So far in this program, we’ve trained two cohorts of community leaders to deliver workplace health and safety sessions. 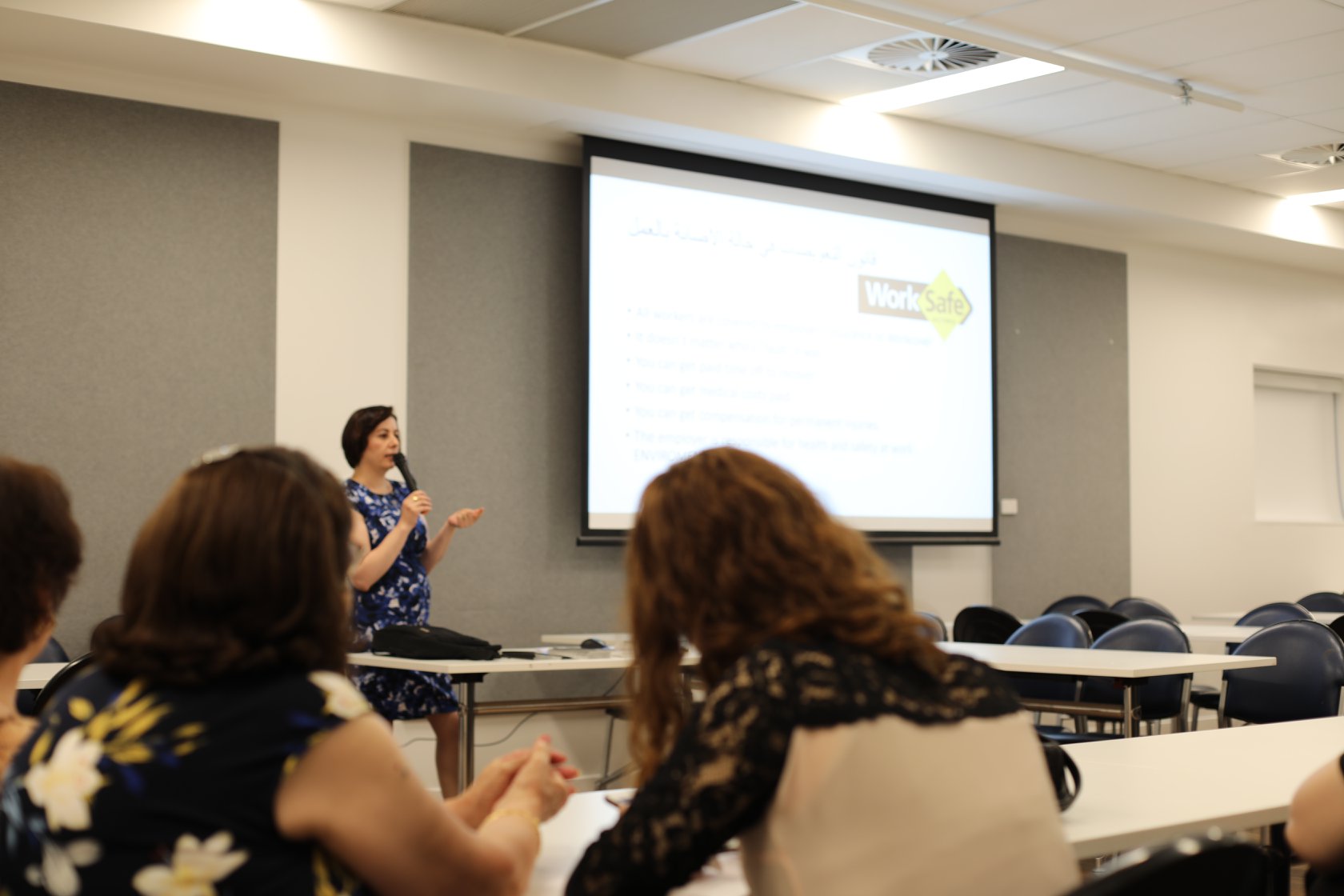 There have been 22 Multicultural Safety Ambassadors to date with 19 languages spoken amongst them. The MSA program has provided community leaders with the information and training to empower their communities, and helped the Migrant Workers Centre connect with workers across varying backgrounds and areas of employment. You can read profiles of some of the MSAs here. The Migrant Workers Centre is currently preparing for the third cohort of multicultural safety ambassadors.

As Victoria re-enters six weeks of lockdown, the Migrant Workers Centre is renewing our push for the Federal government to expand JobKeeper to all workers regardless of visa status. Migrant workers have already faced months of the pandemic without any Federal government support. Another six week means more people at risk of losing their homes and longer queues outside food banks.

A recent report from UTS and UNSW revealed nearly half of international students are paid below minimum wage and a quarter earn less than $12 per hour. This rampant wage theft and exploitation is only set to worsen due to the economic impacts of COVID. The Morrison government needs to expand JobKeeper now so workers aren’t forced to choose between putting food on their table and working under exploitative and risky conditions during a pandemic. The Migrant Workers Centre has signed onto a joint statement with 20 other organisations, demanding that government support be expanded now.

Migrant workers are still fighting for the expansion of JobKeeper. Last month, volunteers in the Migrant Worker Solidarity Network held bi-weekly calling sessions following up with temporary visa holders who had lost work and sought assistance from the Migrant Workers Centre. In the follow up calls, volunteers surveyed how people have been faring over the past months without government support and asked them to send an email to Josh Frydenberg calling for a wage subsidy for all. 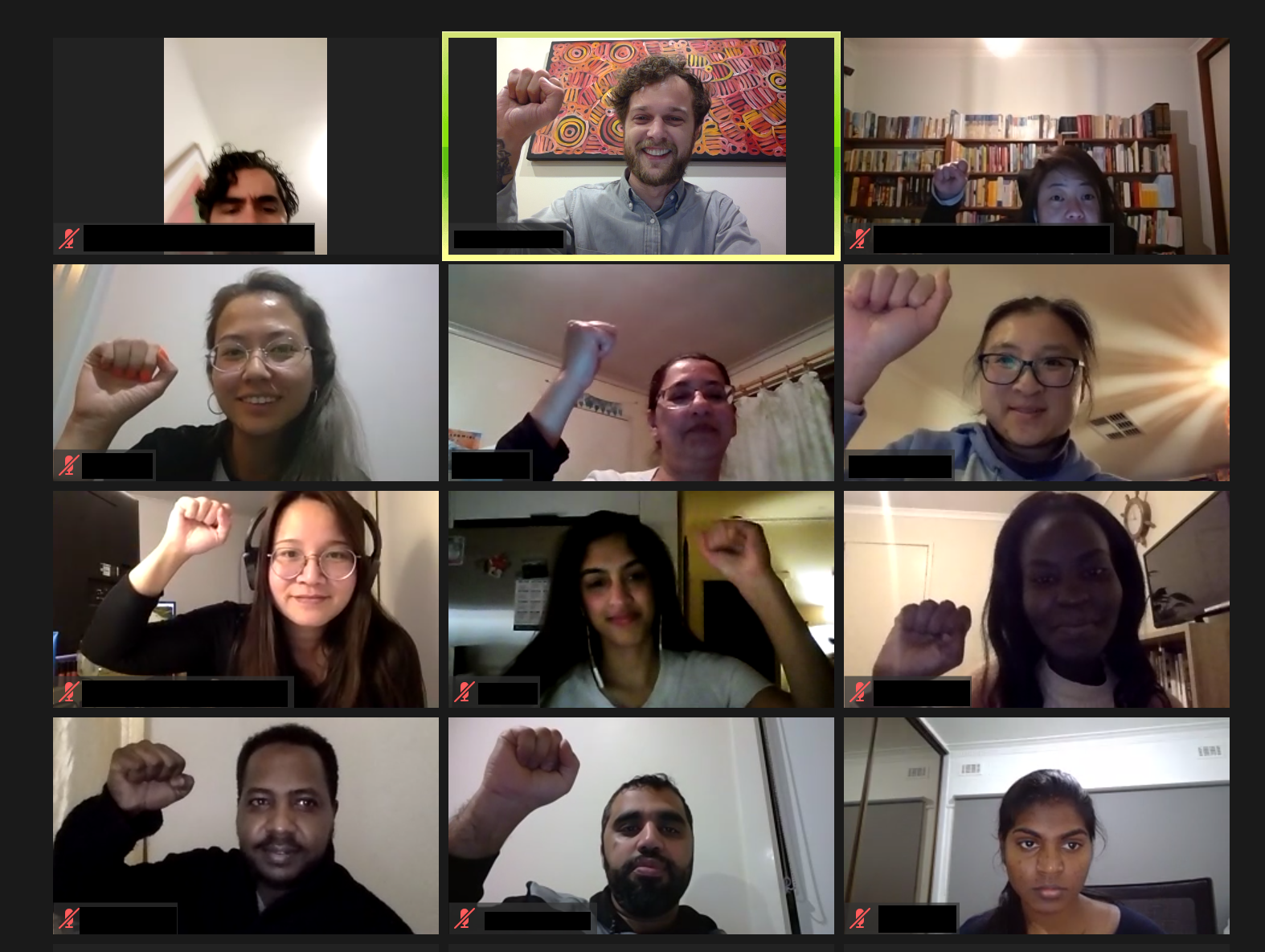 The information collected from the calls paints a stark picture of the challenging reality migrant workers are facing as we reach the fourth month of the pandemic with no Federal government support in sight. 40% of the workers we spoke to still have not found work while many of those who are working again have drastically reduced hours.

Incredibly, throughout this campaign, the Migrant Worker Solidarity Network has grown as workers who initially reached out to us for assistance have been spurred to take action, joined the network and dedicated their time to supporting other workers. 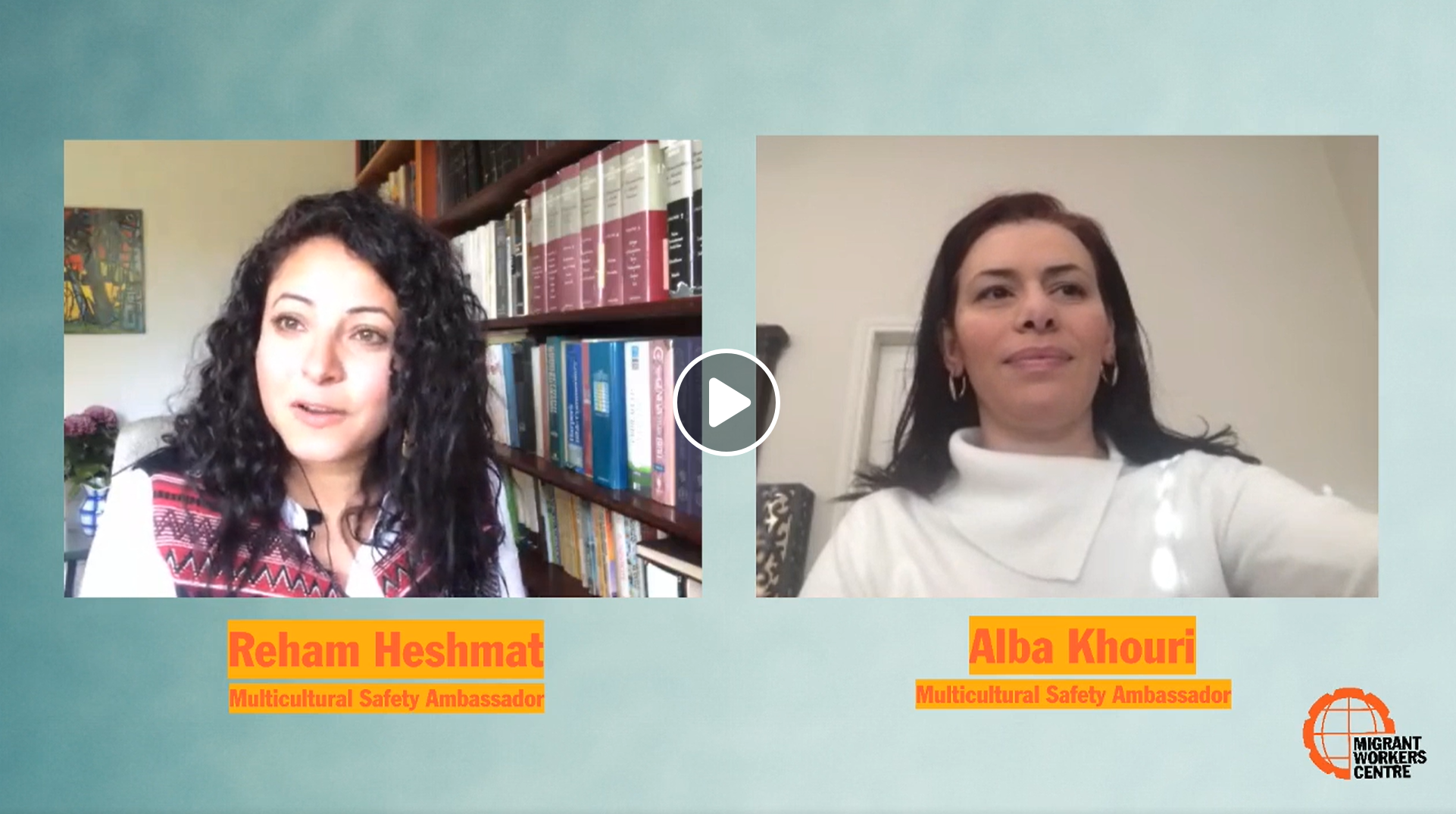 You can watch back all the sessions here:

The Migrant Workers Centre has produced translated pamphlets providing information about finding work in Australia, types of employment, wages and addressing exploitation in the workplace. These pamphlets will be available in English, Arabic, Korean, Spanish, Tamil and Chinese and cover the most common questions we’ve heard from migrant workers who’ve sought support with us.

Click here to find the pamphlets and other translated resources.

Last month, news laws criminalising wage theft in Victoria were passed in Parliament and from the 1st of July, workplace manslaughter laws also came into effect in Victoria. Victoria is the first state to pass these landmark laws which will put more power in the hands of workers in the fight for their rights against exploitative bosses. This has been achieved through years of campaigning by workers and their unions.

The new wage theft laws mean employers who dishonestly without entitlements, falsify employee records such as payslips, or fail to keep employee entitlement records could face fines up to $991,320 or up to 10 years jail time.

Migrant workers will also have more protection at work under the workplace manslaughter laws which have just come into effect. We know migrant workers are more likely to be working in unsafe and hazardous conditions. From now on, employers found guilty of workplace manslaughter will face hefty fines and up to 25 years in jail. These laws are another reason for employers to start treating workplace safety seriously.

If you’re being underpaid or if you’re feeling unsafe at work, click here to contact the Migrant Workers Centre and make an appointment.