The October newsletter features updates about:

The Migrant Workers Centre has reached the huge milestone of $1 million in recoveries for migrant workers. Since launching in 2018, the Centre has assisted over 500 workers and the $1,000,000 includes money recovered from stolen wages, unpaid superannuation and entitlements and WorkCover claims.

“We are incredibly proud to have supported workers to reclaim the wages they were rightfully owed. But let’s be clear - this milestone represents $1 million in wage theft that should never have happened. And it’s a drop in the ocean in terms of what migrant workers are experiencing in Australia.” said MWC Director Matt Kunkel

The Migrant Workers Centre looks forward to continuing to stand alongside migrant workers, fighting for their rights.

In the coming weeks, we’ll be sharing stand out stories and wins from migrant workers over the past two years. Make sure you’re following us on social media to catch all the updates.

In partnership with Unions NSW, the Migrant Workers Centre has launched a survey looking at piece rate payments in the horticulture industry. 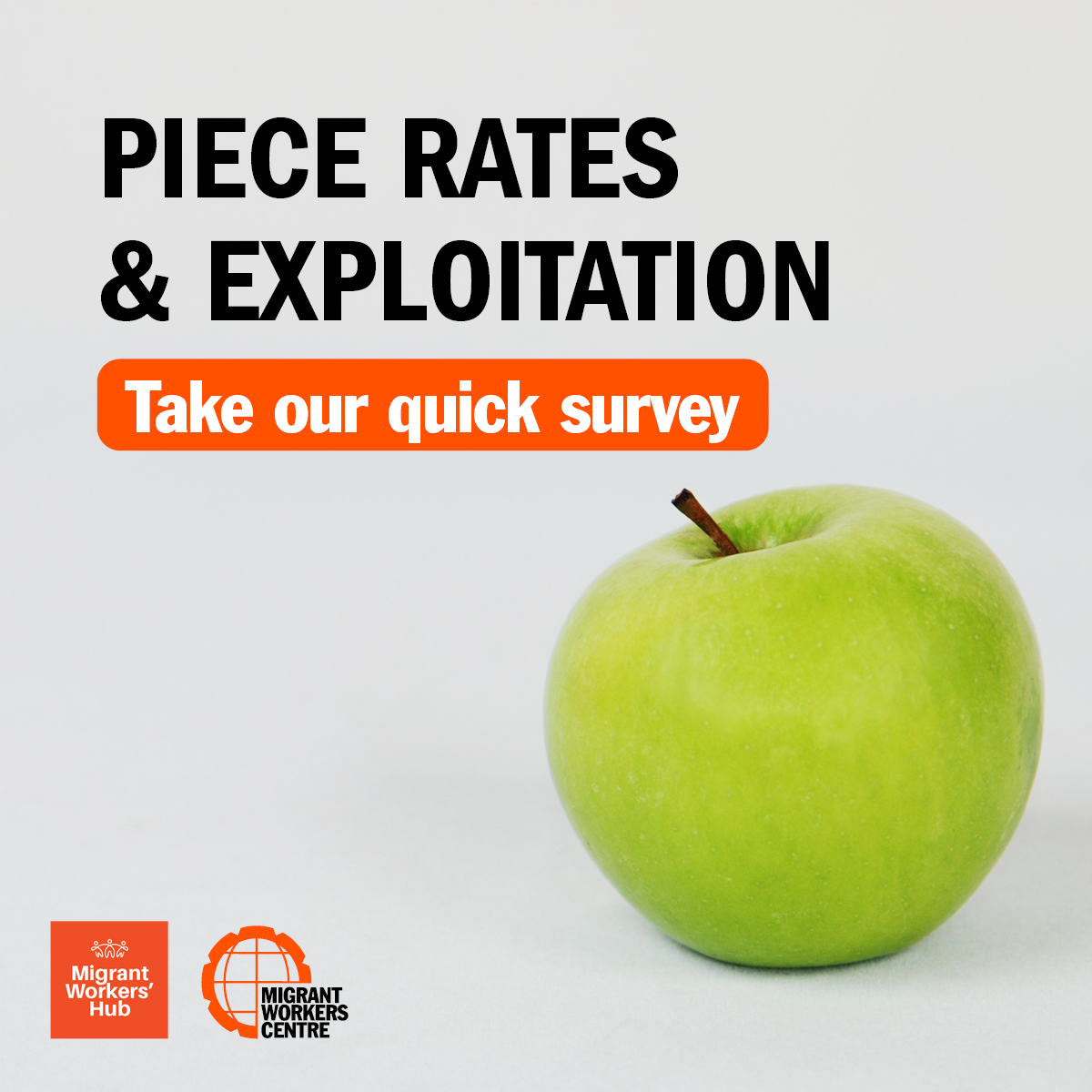 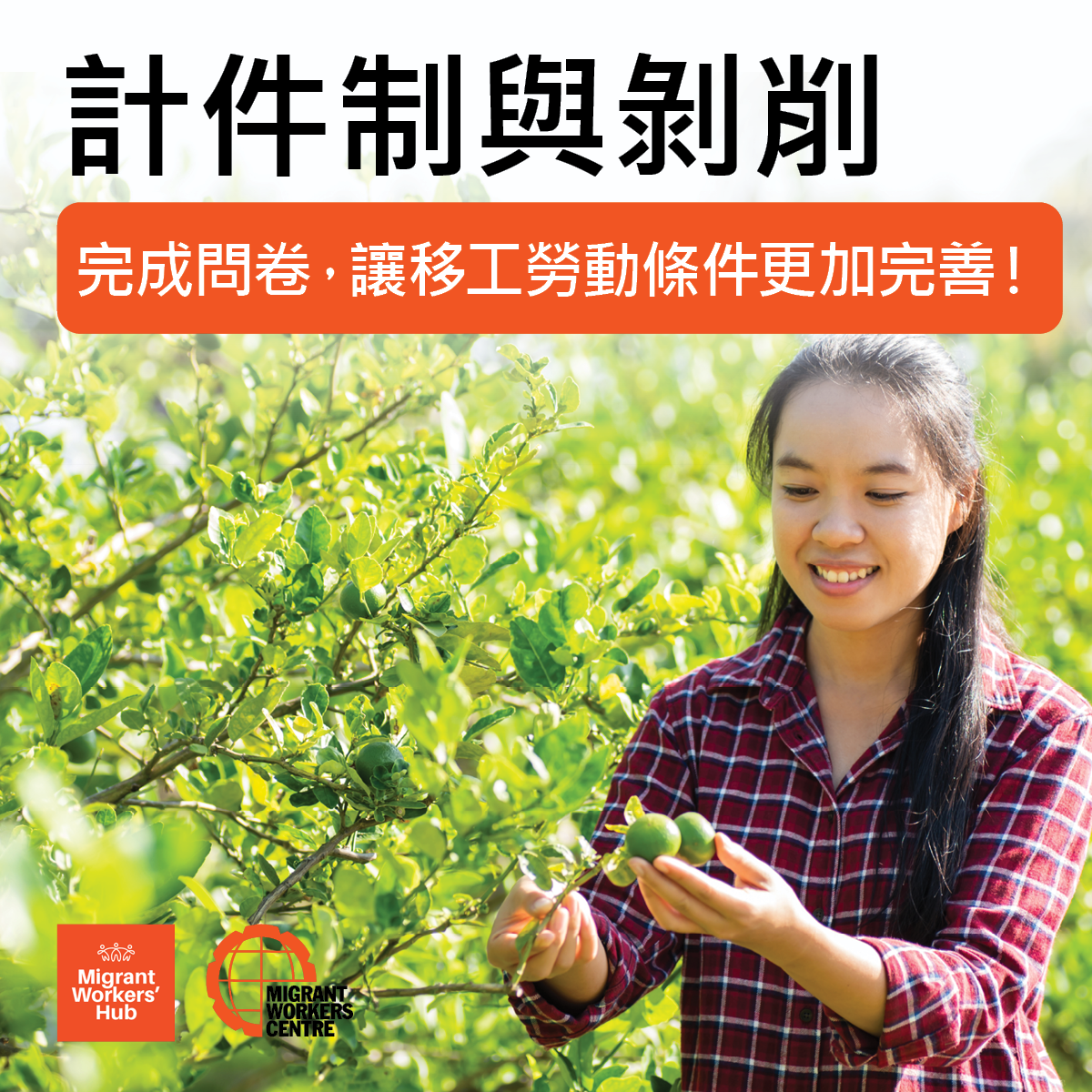 ‘Piece rate payments’ refers to when workers are paid by the amount of produce harvested or packed rather than by an hourly wage. It is a legal loophole to workers being paid below the minimum wage, and the exploitation of working holiday makers in this industry is one of the most common grievances brought to the Centre. Stories like Jarvis’ - who worked picking tomatoes without receiving any pay for 3 months - reveal the harsh and abusive work conditions workers face.

This survey is the first step in understanding workers’ experience of piece rates, and will inform our campaign demanding better work conditions in the horticulture industry. You can join the fight for fair wages by filling out the survey here. 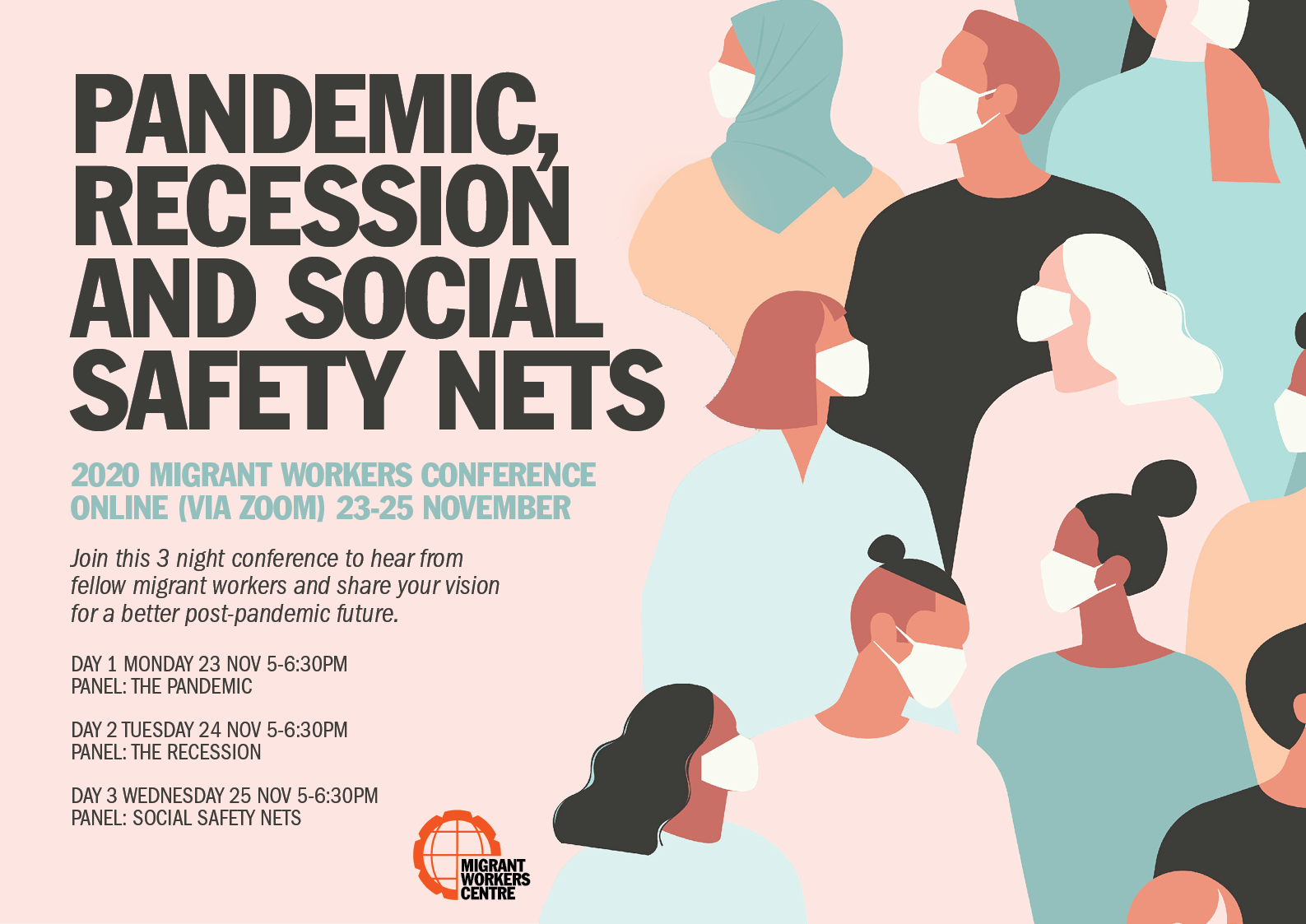 Migrant workers, unionists, campaigners and specialists in this field are invited to attend our upcoming Migrant Workers Conference: The Pandemic, The Recession and Social Safety Nets. The Conference will take place over three evenings from Monday 23 November to Wednesday 25 November.

This year has been especially tough for migrant workers. From those on sponsorship or bridging visas to international students and working holiday makers - migrants faced this pandemic without any Federal government support.

The Migrant Workers Conference will explore the impacts of COVID-19 and the recession on migrant workers. Come to hear what changes migrant workers are asking Australia to make and add your voice. CLICK HERE FIND OUT MORE AND TO RSVP.

A written conference guide and multilingual glossary will be also be provided prior to the event.

Worker Story: Working for Victoria program a lifeline for migrants during COVID-19.

Soo, Sermet, and Tiff share how Working for Victoria gave them a lifeline during COVID-19 and speak about what more needs to be done to support migrants.

Soo, Sermet and Tiff led very different lives, Soo and Sermet came to Australia in 2019 - Soo with her family from Malaysia and Sermet from Turkey. Tiff meanwhile has been living in Australia for 10 years. Despite their different circumstances, their paths crossed when they found themselves without work or federal government support amidst a pandemic - a situation shared by hundreds of thousands of migrants in Australia. After months of financial struggle and facing eviction from their homes, they were given a lifeline when they found work at the Asylum Seeker Resource Centre through the Working for Victoria program.

For Soo and Sermet - the program has been an entry point to employment in Australia which recognised their professional skills and qualifications. Sermet says when he arrived, “I couldn’t find a professional job even if I showed my degree - they just kept saying I don’t have local experience.” Similarly, Soo had ten years’ experience working as a travel agent in Malaysia. But after coming to Australia, she had to start again because her experience wasn’t recognised.

Working for Victoria was an opportunity for Soo and Sermet to use and and develop their existing skills and qualifications. Soo says, “[ASRC] saw I have experience in customer service, talking to people and communication skills. I’m so happy I can use my experience and talent.” Sermet echoes this sentiment, “I studied advertising and communication. I mentioned [my experience] at my interview. We picked departments - fundraising and marketing was one of them.” Now Soo is working as a Key Relationship Assistant in the Fundraising and Marketing department, Sermet is working as a Marketing Project Officer.

Meanwhile, Tiff has been in Australia for nearly 10 years but had experienced rampant exploitation and wage theft during his eight years in the hospitality industry as a chef. When COVID-19 struck, he lost his job, “My boss stopped me coming to work because I couldn’t get JobKeeper.” Now Tiff is working in ASRC’s kitchen and foodbank.

For Tiff, Working for Victoria wasn’t just a job but one where he was finally paid fair wages and worked under good conditions. Tiff says, “I’m really happy… there’s no underpayment at all, no dodgy bosses, no abuse... The Working for Victoria initiative changed my life.” 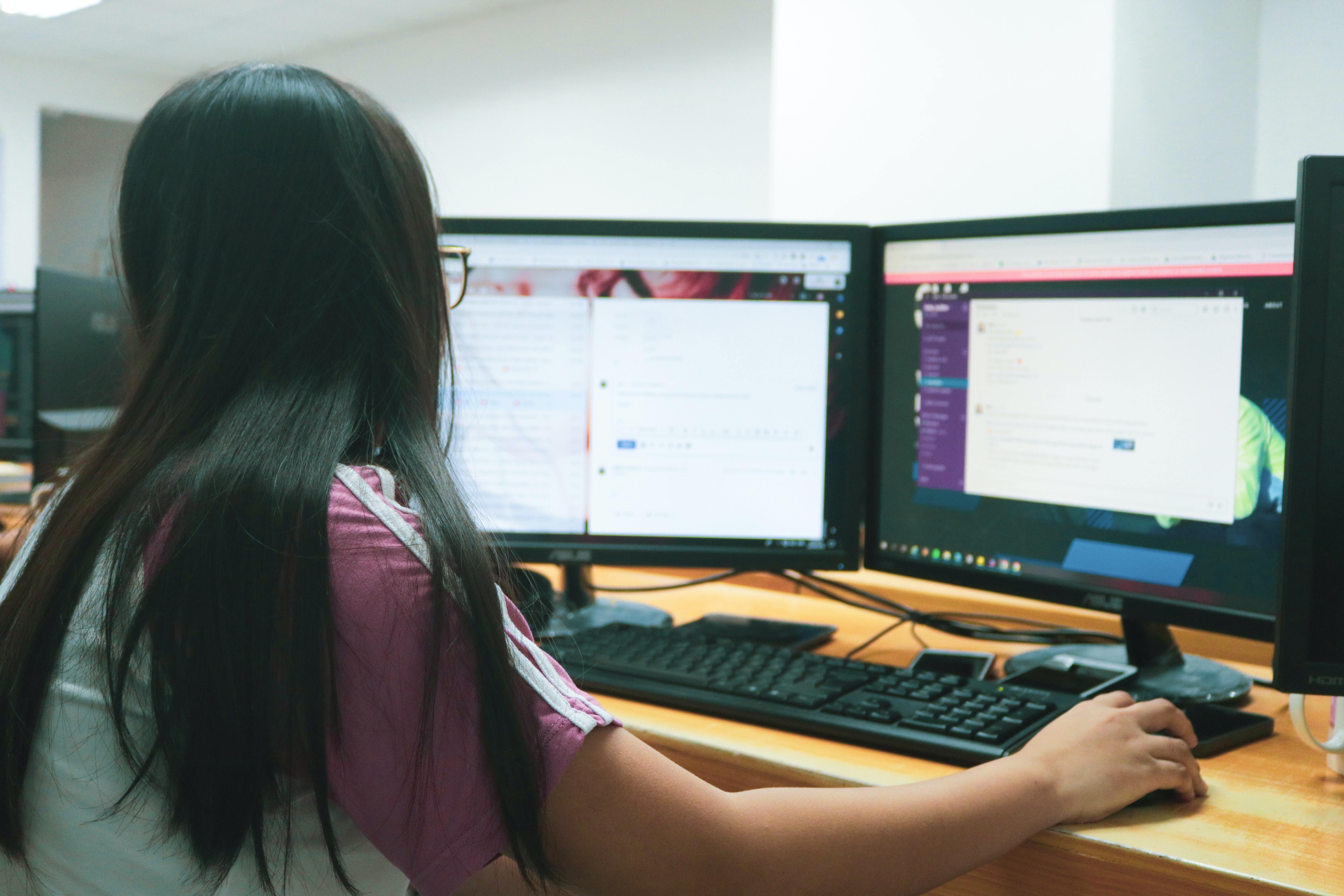 While the program was a lifeline in difficult times, Soo, Sermet and Tiff are nevertheless realistic about the challenges they still face. Their 6 month contracts are set to end in early December, and they’re feeling grim about employment prospects, especially over the Christmas period.

Working for Victoria has been a foothold but not a solution to their problems. While 6 months of income has been welcome relief, Sermet says, “For the first probably 4 months, I only paid my debt,” and the others agree. Sermet, Soo and Tiff’s experiences highlight how structural disadvantages and barriers for migrant workers accumulate and make it harder to get life back on track. Instead, meaningful and long term support is needed. While programs like Working for Victoria are incredibly valuable, the limited relief shows it needs to be accompanied by ongoing access to income support, accessible housing and stamping out exploitative work conditions to ensure migrants don’t fall back through the cracks.

The reality all three echo is, while it has been a blessing to get local work experience, it isn’t a way out. They’re clear that they’re very thankful and grateful for the program so far, but are calling for it to be continued.

This is an abridged version of Soo, Sermit and Tiff’s story. Read the full version here.

Returning to work post lockdown: Are you being paid correctly?

As COVID restrictions ease and workplaces start opening up again, the Migrant Workers Centre is continuing to help migrant workers fight for fair wages and work conditions. ‘Back to normal’ isn’t enough when workers were already facing exploitation, job insecurity and wage theft prior to the pandemic.

The current minimum wage is $19.84 per hour and you should be paid more if you’re a casual employee or depending on your enterprise agreement. While at work, it is also your employer’s duty to make sure you’re safe - that includes making sure appropriate OH&S and COVID safe procedures are in place. If you encounter health and safety problems at your workplace or think something isn’t right, you should speak to your Health and Safety Representative. If you think you’re not being paid correctly or need assistance from the Migrant Workers Centre, you can make an appointment here.

In recent weeks, three delivery riders have been killed on our roads. Chow Khai Shien from Malaysia was killed while delivering for DoorDash, Dede Fredy while delivering for UberEats and Xiaojun Chen for HungryPanda. Because gig workers are classified as independent contractors, their families have not been able to access any workers’ compensation, nor are the companies they work for held accountable to provide a duty of care to their workers.

The Union movement has long been advocating for gig workers to be classified as employees, which would mean gig companies would be required to pay fair wages, provide entitlements like superannuation and sick leave, and ensure worker safety. Recently, the Young Workers Centre launched a gig work survey and a round of worker consultations to find out what changes gig workers want for the industry. The findings are being used in a submission to the Victorian Government which is looking to implement industry wide reform.

Many migrant workers find themselves working in the gig economy due to barriers to finding secure employment due to visa status or international qualifications not being recognised. The Migrant Workers Centre will continue to work with the Young Workers Centre and the union movement for reforms to better protect gig workers. If you’re a gig worker and you’re experiencing problems with work, you can make an appointment with us here.

You can read previous editions of our newsletter here.