Welcome to the first edition of the Migrant Workers Centre newsletter for 2022. This year, we’ll be bringing you quarterly wraps of our industrial wins, campaigns and programs, and worker stories.

The Protecting Migrant Workers Bill seeks to criminalise and expand the penalties for businesses who exploit workers on temporary visas. The Bill also prevents employers who’ve broken the law from sponsoring new migrant workers. Migrant worker exploitation is a systemic issue which needs to be addressed however the Bill falls short by failing to protect the workers who have been exploited. Without whistle-blower protections, workers who report their employer for wage theft risk losing their visa and being deported.

Key recommendations from our submission call for: 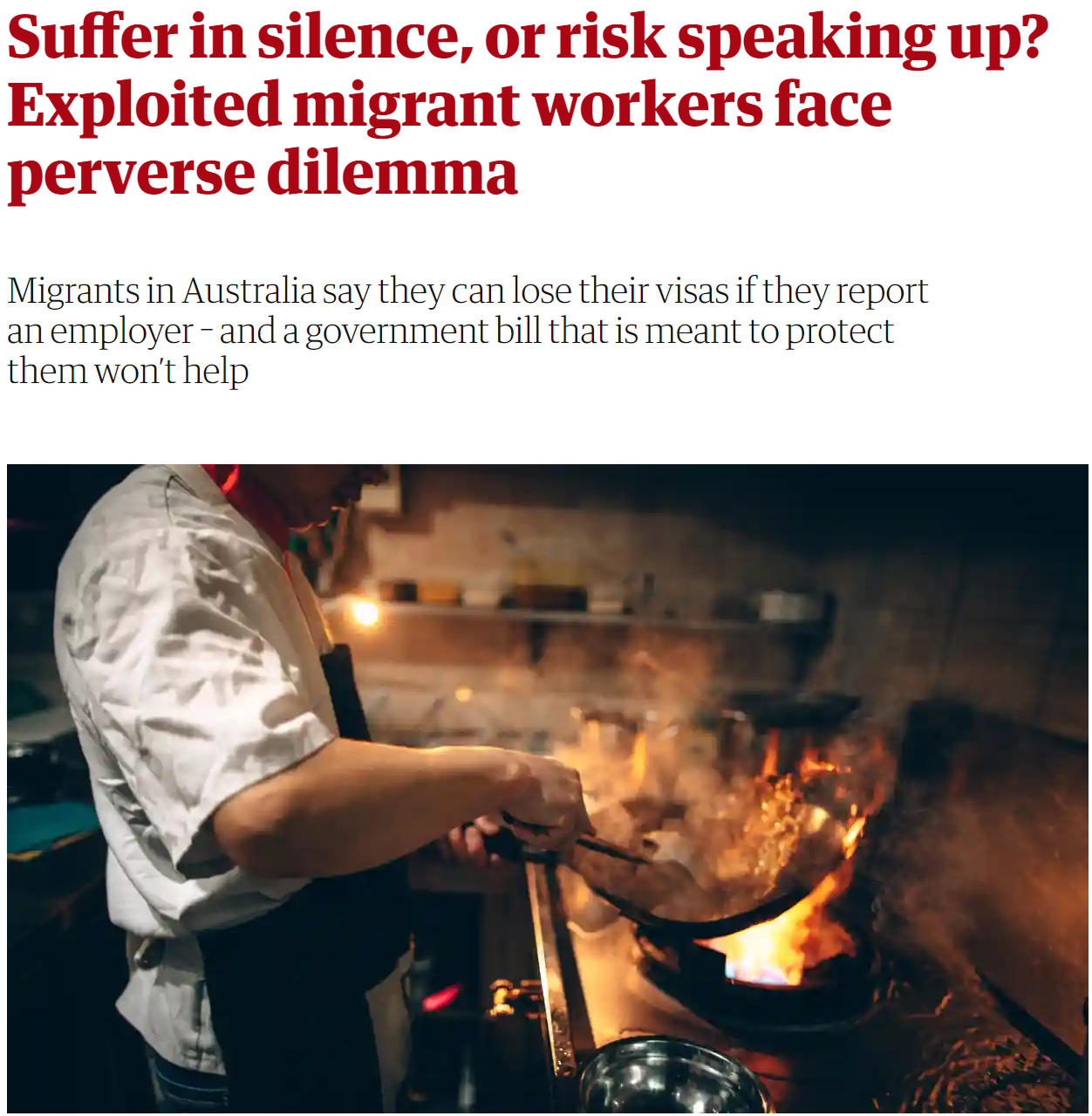 One worker who recently faced the injustices of the employer sponsorship visa system is Michael*. Michael came to the Centre for assistance earlier this after his employer was found guilty of wage theft and lost the right to sponsor workers. Michael was from Vietnam and had worked and built a life in Australia with his family for nearly a decade. Despite working for the employer for two years and complying with all visa requirements – Michael lost his visa and has had to start the sponsorship process all over again. This was the third time an employer sponsored visa had fallen through for Michael through no fault of his own. Michael had tried appealing to the Department of Home Affairs to no avail. Despite the system being stacked against him, he’s courageously shared his story in the hopes of bringing about change.

Our Lives in Limbo report last year revealed extremely high levels of stress amongst temporary visa holders, the highest being amongst those on employer sponsored visas - due to the precarity of their visa and future being reliant on a single employer. Without whistle-blower protections, the Protecting Migrant Workers Bill will only increase stress and put more workers in Michael’s position.

The survey also found a majority of people recognised migrants help fill skill shortages for particular jobs and agreed with the statement: migrants should have stability to plan for their future here no matter what type of visa they hold.

This report is a turning point for our campaigning and advocacy for migrant workers’ rights as it allows us to point to indisputable evidence that Australians overwhelmingly support fair treatment of migrant workers. Read more about the report and its findings here. 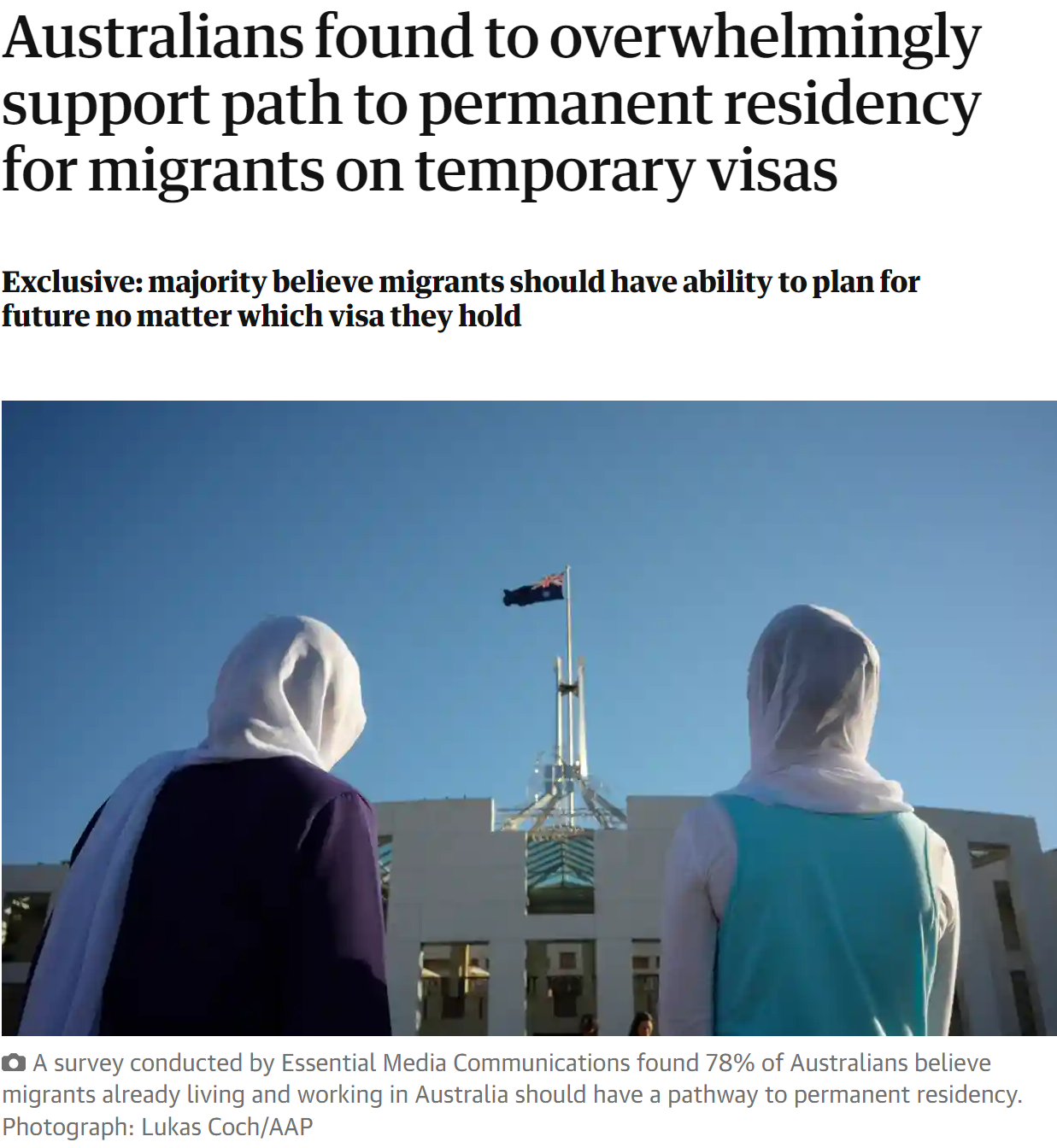 A cohort of migrant workers who have been facing a long and difficult road to permanent residency are 887 visa applicants. The 887 visa is one of the few visas with a pathway to permanent residency in Australia and only eligible after applicants have lived and worked in a regional area in Australia for two years. Since the pandemic, the processing times for this visa has exploded, leaving many workers living in limbo with uncertain employment prospects, restrictive requirements for residency locations, and unable to plan for the future.

Shweta, an applicant who’s waiting for her visa, recently shared her story with the Migrant Workers Centre and the media in hopes of shedding light on what life with visa precarity is like. 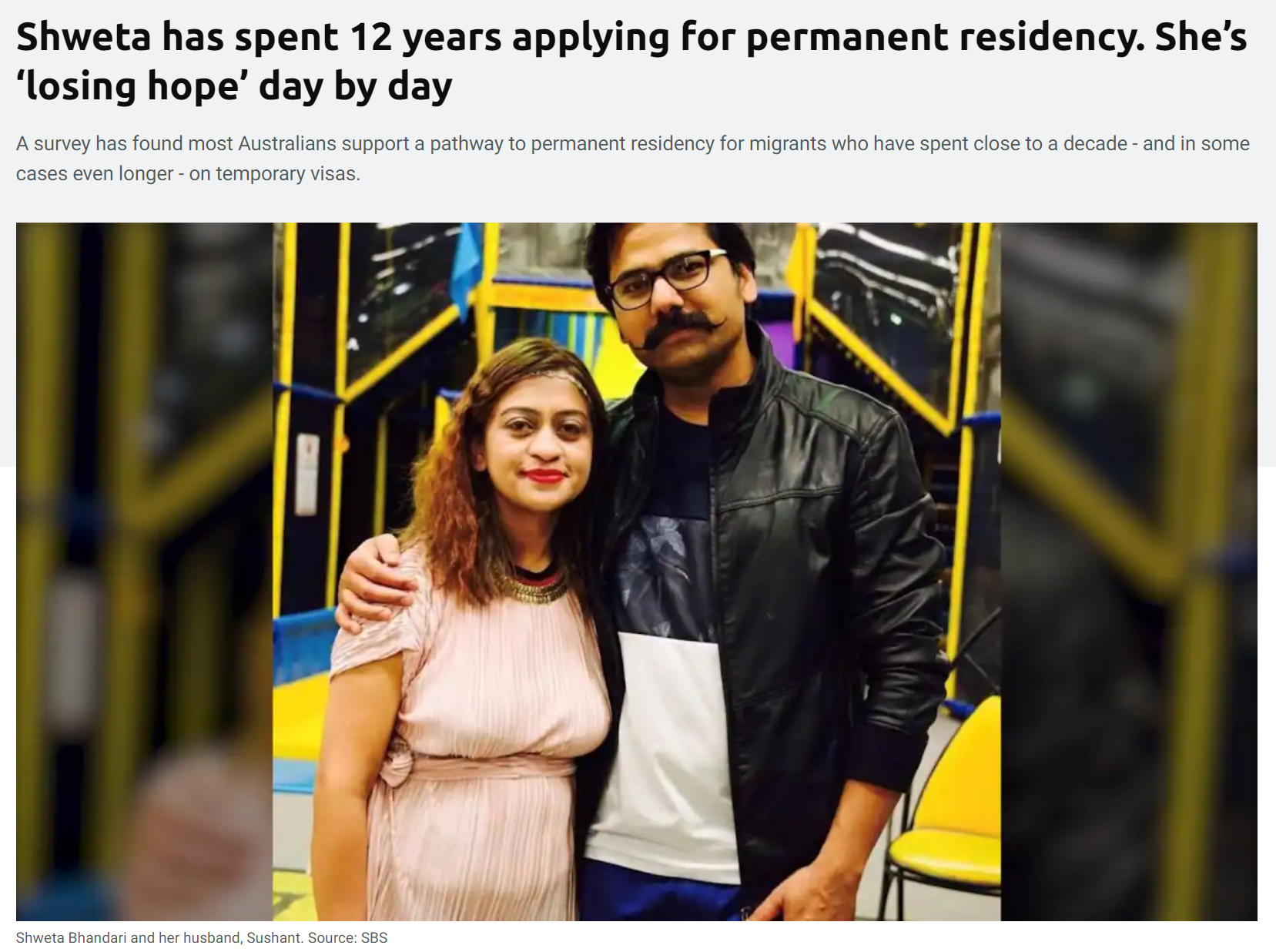 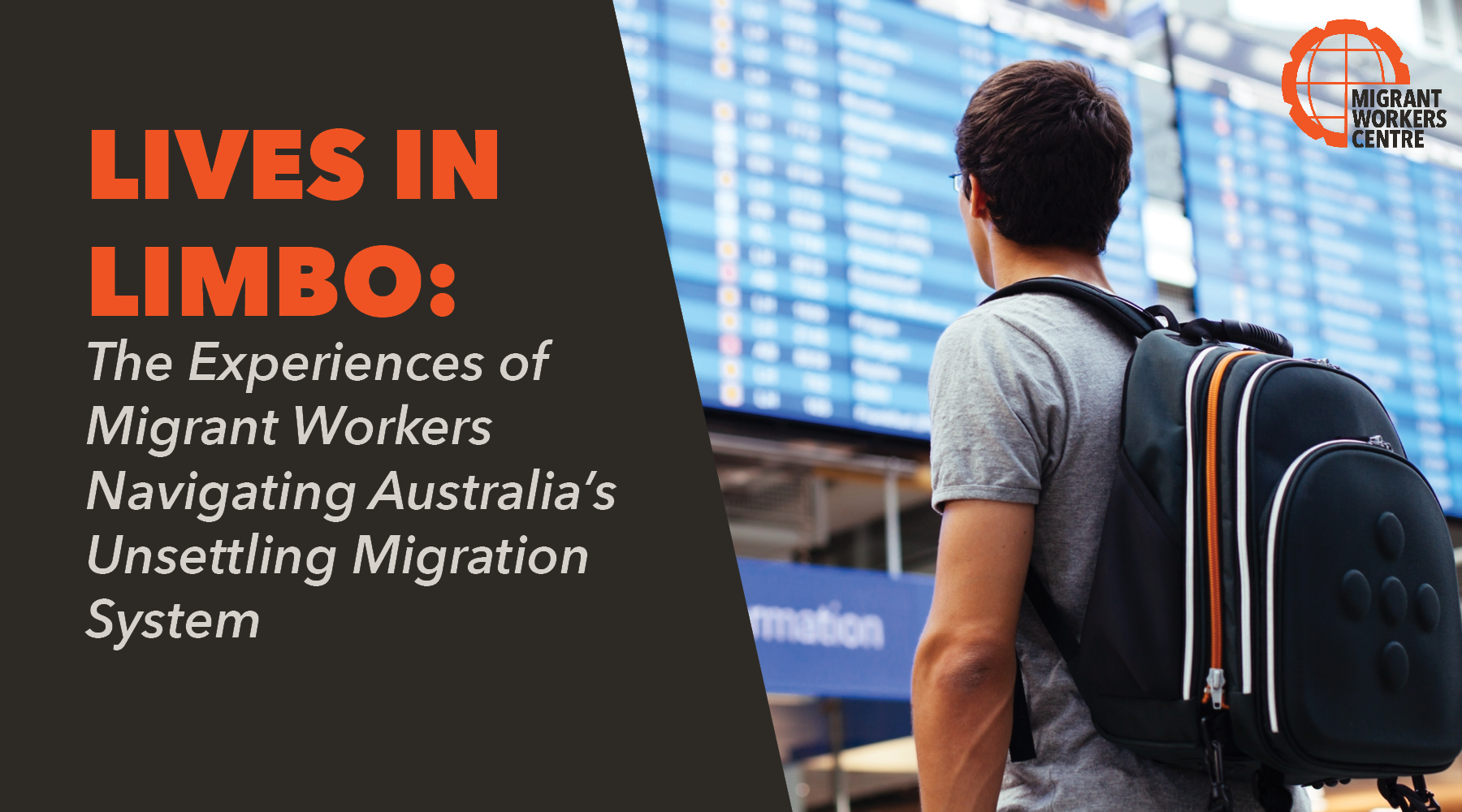 This huge increase in visa processing times further entrenches a class of workers with limited rights who are vulnerable to exploitation.

Since Shweta shared her story, many workers waiting for their 887 visa have contacted us with similar stories. In response, the Migrant Workers Centre has launched a survey hoping to better understand the scale of workers affected.

If you have applied for an 887 visa or recently been granted one - can you take a couple of minutes to fill out this short survey? 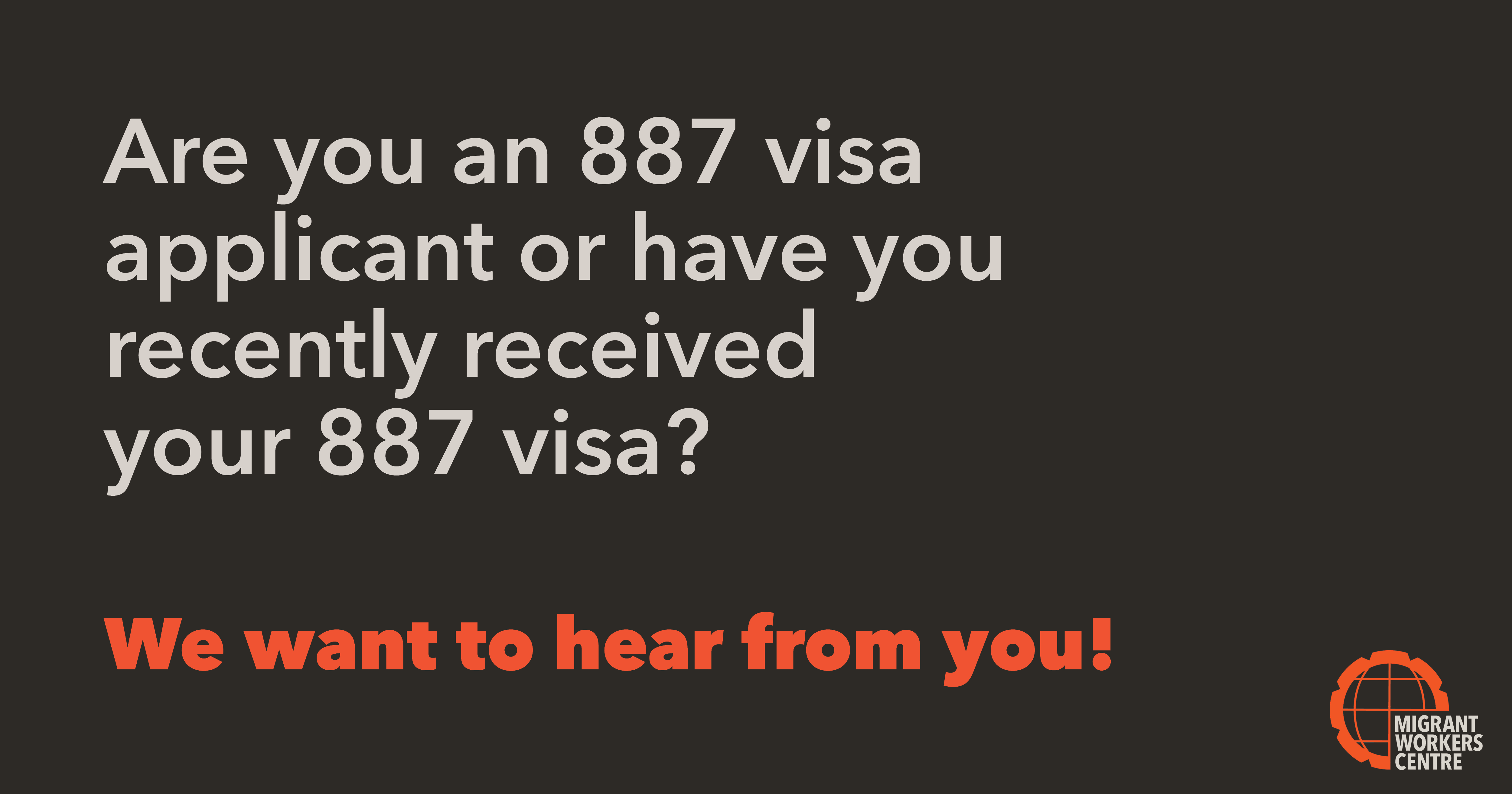 Karun* came to the Migrant Workers Centre for assistance in February. Karun had been working as a casual employee for a food packaging company in Victoria. After six months of employment, he decided to leave, but upon resignation – his employer withheld his final pay of $2500.

This practice is unfortunately not uncommon from employers seeking to take advantage of workers’ insecure and short-term visa status or lack of familiarity with Australia legal processes. Another worker who came to the Centre recently described how she was forced to leave jobs without notice because “you never get your final pay cheque if the bosses know [you’re about to leave]”.

Luckily, Karun came to us for advice quickly and learned his employer could face legal penalties for wage theft. Migrant Workers Centre organisers also outlined to Karun the steps we could support him to take to reclaim his stolen wages.

Emboldened by this new information and support, Karun confronted his employer and made it clear he knew his rights and wouldn’t back down without a fight. The employer subsequently promptly paid the outstanding amount in full. While this matter was quickly resolved, it illustrates how accessible information in language and support for migrant workers to navigate dispute resolution procedures can go a long way to empower workers and deter unscrupulous employees.

The Multicultural Safety Ambassadors program continues with ambassadors leading sessions on workplace rights and safety. Safety ambassadors Florence and Dennis kicked off the year with a Post Arrival Orientation Seminar at the Philippine Consulate General in Melbourne for international students who’ve just arrived in Australia. In addition to running these collaborative sessions, the Philippine Consulate is also distributing Migrant Workers Centre resources on wages and workplace rights. 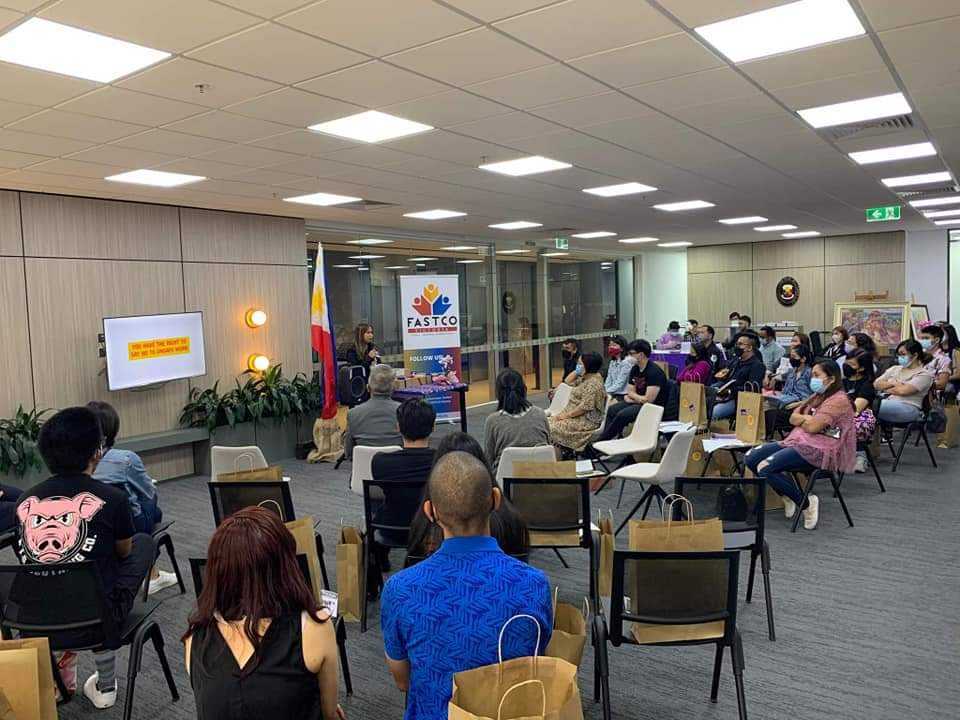 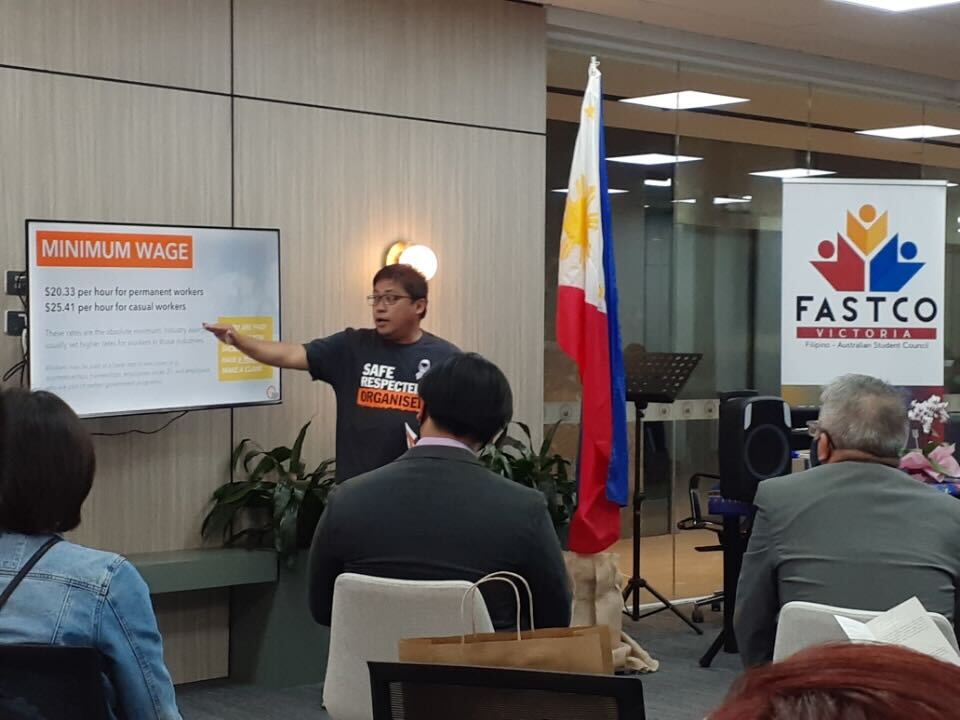 Our resources are also available from our website in English and a number of translated languages.

Book a Know Your Rights session

Our Know Your Rights program has kicked off again for the year with Migrant Workers Centre organisers running sessions with community groups and TAFEs. The sessions cover basic information about workplace rights including minimum wage, penalty rates, safety at work, types of employment and where to get assistance with workplace issues. Sessions are available in English, Chinese, Arabic, Nepali, Korean and Spanish and can be conducted in person or over Zoom. If you’d like to book a session for your organisation, fill out this form and we will be in touch 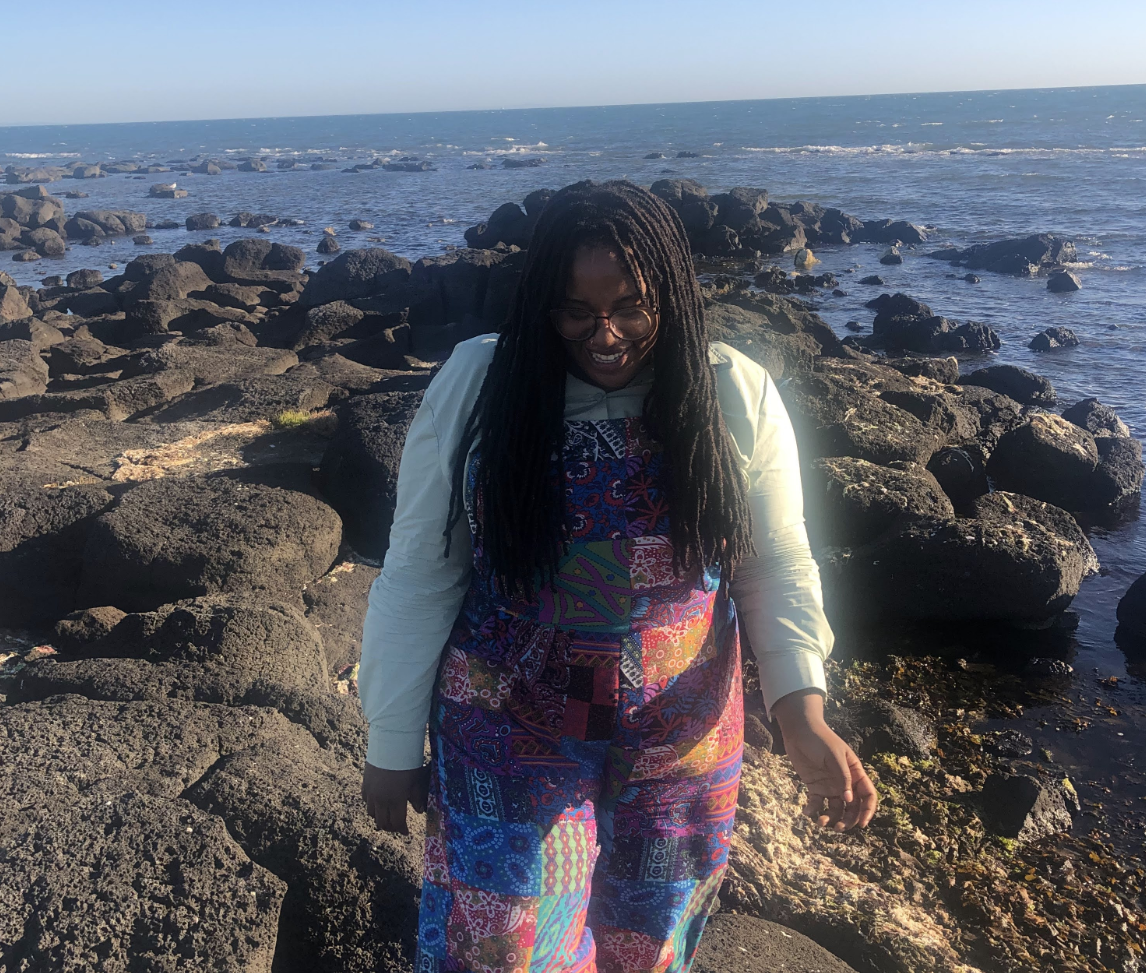 Hi! I’m Haniah, the new community organiser here at the Migrant Workers Centre. I’m a first-generation Spanish speaking American who migrated to Melbourne on a student visa four years ago. After finishing my Master of International Relations focusing on climate migration, I had the privilege of co-founding the Australian Youth Climate Coalition's POC Climate Network and enjoyed organising and supporting young people across Australia. And while I’ve organized and campaigned in a few different movements across the world, nothing beats being here, at home, at the Migrant Workers Centre. It’s a privilege to work alongside so many passionate and brilliant minds here at the MWC and I can’t wait to see all of the amazing things we can achieve for migrant workers!

If you need help with a workplace issue, click here to book a free and confidential appointment with an organiser. Our team speaks English, Arabic, Chinese, Korean, Nepali and Spanish and interpreter services for other languages are also available.

The Victorian Government has announced a Sick Pay Guarantee for casual and contract workers. This is a landmark win for workers’ rights and has been set up in recognition that better job security and leave provisions are needed for casual workers in critical industries. No worker should have to go to work sick in order to support themselves and their families

This guarantee provides up to 38 hours per year of sick or carer’s leave paid at the national minimum wage of $20.33 per hour. In this initial period, the Guarantee will be accessible to workers in hospitality, food preparation and food trades, retail and sales support, supermarket supply chains, aged and disability care, cleaning and laundry, and security. Further industries and occupations will be announced later in the year.

The Sick Pay Guarantee is provided by the Victorian government, and you do not need to tell your employer if you apply. Click here to find out more, see translated resources about the program and to apply.